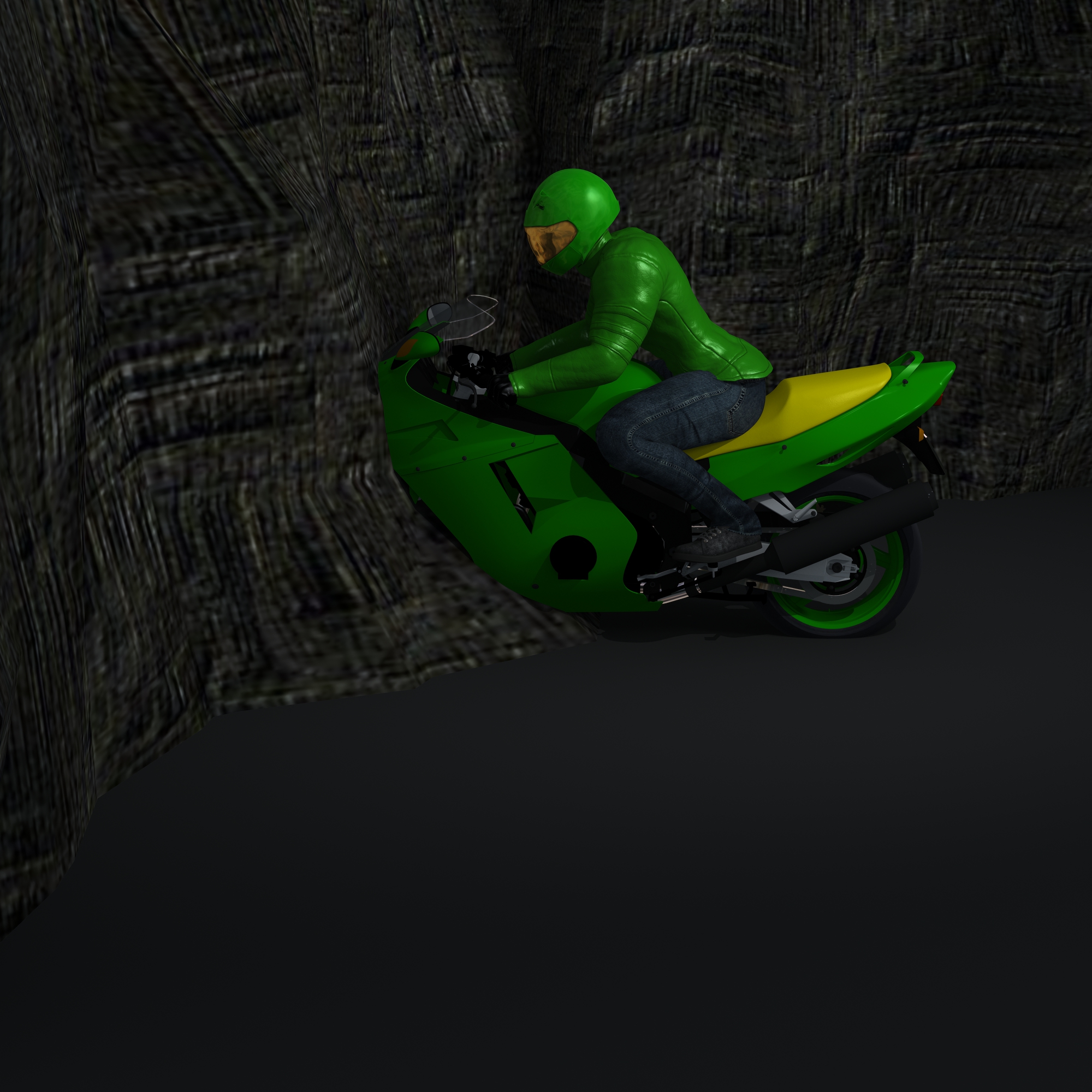 This sprint to the Bat-cave always got Dick adrenaline pumping. It was just something about it he could never pin point. Maybe it was the speed, or the danger of flying down the road at over two hundred miles an hour, taking corners fast than ever thought. It could have been the anticipation of about what was to happen; knowing that he Dick Grayson was the Robin, Batman's partner and soon he would dressed as a hero and charged with saving who knows how many people.

Whatever the reason was Dick was on pins and needles and he could feel it. As he entered the home stretch and approached the secret location of the Bat-cave, he didn't slow up as he took the fork in the road that seemed to lead to nowhere except the side of a mountain. Dick had to admit this was the part that always un-nerved him just a little bit no matter how many times he did it.

The Bat-cave and its entrance was shielded and hidden by a holographic force field that made the opening to the cave look like the side of the mountain. When Dick entered the cave on his cycle he was still traveling at close to one hundred miles per hour when he appeared to hit the side of the mountain, but instead merely disappeared into the rock face. 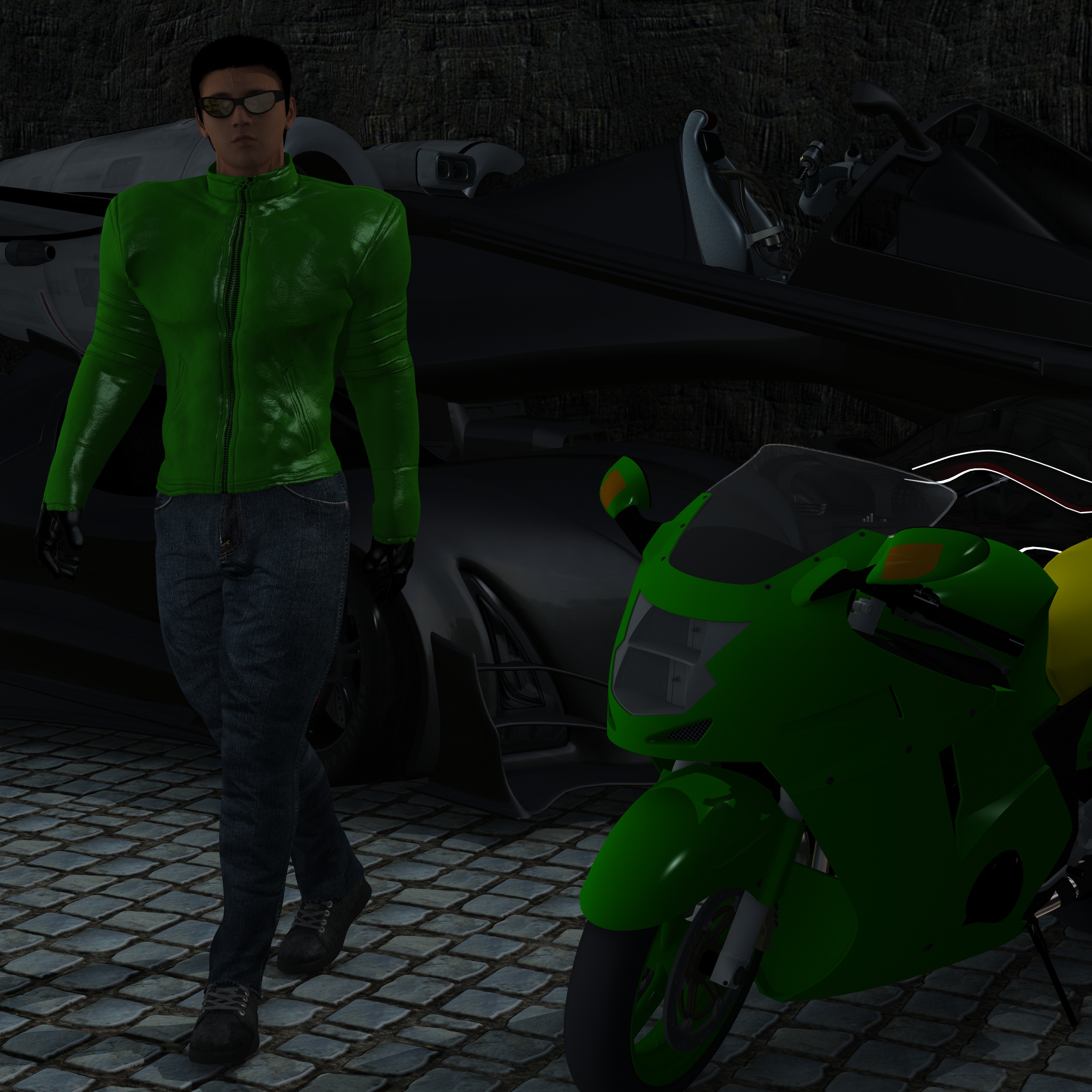 Once he penetrated the force field Dick hit the brakes hard coming to a stop at his usual parking spot next to all the other Bat vehicles, the Bat-cycle, the Bat-car and the Bat-jet, all vehicles that were at his disposal should he need them. He straddled the cycle between his legs as he shut it down and lowered the kick stand. He undid the chin strap, pulling g the helmet from his, followed by dismounting the cycle. Before he left he gave it a pat on the windshield as if to say thanks. As he began to walk, he reached down to adjust his semi hard cock into the right position for walking. Thinking to himself, "God, I love my life."

He made his way into the part of the massive cave that contained the super computer that gave the two heroes’ the upper hand on information when I came to fighting crime. He was on his own today, knowing he would have to make the decisions and not rely on Batman. Sure he could call him; he knew his partner would be there to help, but he needed to prove himself, not only to Batman but also to himself. He knew he could do this.

He could feel his nerves building and his blood pumping, truth be told this kind of thing even aroused the young macho hero sexually. He liked to show off for the ladies and wanted to be the center of attention. Well today was his chance, he was on his own; he would get the attention he wanted, that is if he could help and come to the rescue. 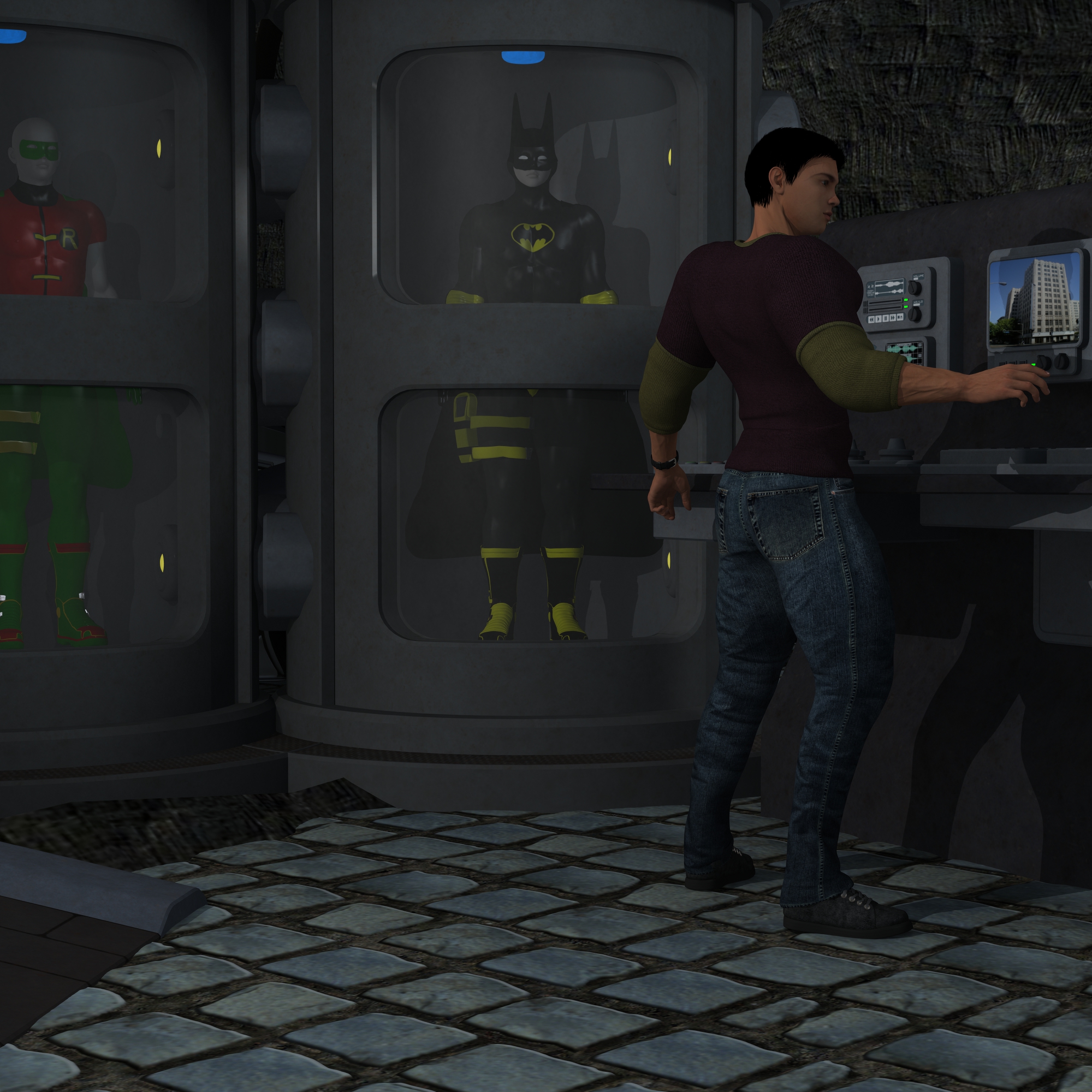 Dick quickly got all in the information he had into the super computer to be analyzed, along with all the information it already had gathered from the internet. It was an amazing piece of engineering. It collected data from every source on earth and spit out the best information. It helped Batman and Robin fight crime in the city as well as around the glove. Now all he had to do is wait for it to do its work. 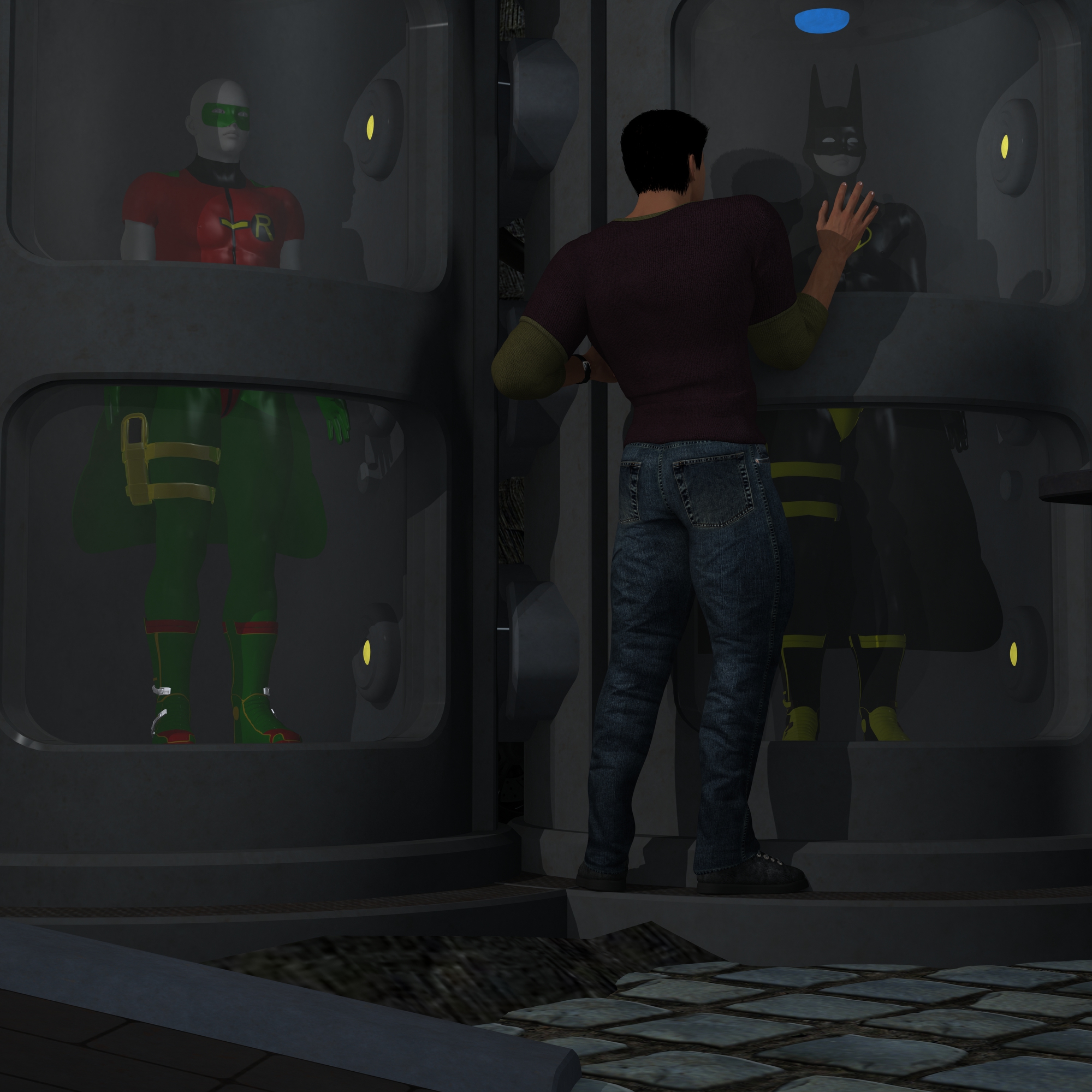 Dick stood there at the console waiting for the computer to do its work Dick had some time on his hands. He figured he would have to go out and investigate this no matter what the results were. He would take the time and get changed into his superhero duds. Even if he didn't have to go out, it didn’t matter, he took any chance he could to be in his suit. It showed of his body like nothing else could. He loved the way he felt in it and the way he looked.

As He stepped up to the pods that held his and Batman's uniforms, he paused for a minute looking through the glass at the uniform Bruce Wayne wore, the one that hid his real identity and made him the mysterious, reclusive superhero they called Batman. It was an impressive uniform to say the least. It provided protection as well as giving Batman his persona. Robin couldn't help but admire it.

All he knew was that he wanted to wear that suit just once to see how it felt, to see what it was like, to be Batman. Hell, when it came down to it he wanted to be batman in the worst way. In a way he was sick and tired of playing second fiddle and being the sidekick, it was his time to be the hero, the front man who got all the credit. This was his chance to take some of the credit he felt he deserved.

Yes, he loved being Robin, but he yearned to be in charge and be Batman, who wouldn’t. He stood there with the glass between him and the suit that would give him the power and notoriety he wanted. He was filled with all kinds of feeling and emotions. While one hand gently reached out to touch the glass, in an attempt to make contact with the suit, his other hand slid down to his manhood. It was calling for attention, attention that was being generated by the admiration he had for Batman and his suit.