Samson Jones cursed himself for his carelessness. He had blundered into the trap in the underground corridor of the suspected slave trader Kwan Lee, and now he found himself a helpless prisoner, facing brutal Torture.

His training as an agent of the “Multinational Undercover Security and Covert Law Enforcement” agency, better known as M.U.S.C.L.E., should have prepared him, but his natural impulses and inclination towards rushing into a situation had gotten the better of him. Now he found himself a captive of the slavers!

He had rushed into a tunnel leading into the underground lair of the Slave trading ring without checking for booby-traps or tripwires, and had been knocked out by multiple tranquilizing darts shot out from hidden guns in the walls.

When he awoke, his massive ebony body had been stripped to the waist, displaying his almost inhuman muscular development as he knelt on the sands of Kwan's tropical island headquarters. He was bent backwards, exposing his massive chest and rock-like abs to the full rays of the Equatorial sun, his body already gleaming with sweat in the intense heat and humidity. His ankles and wrists were shackled together inside a thick steel box that was supported by posts driven deeply into the ground. He could not move his hands more then a quarter inch inside the box, locked as they were to the solid steel shackles around his ankles. The muscles in his thick shoulders and chest bulged and rippled as he struggled against his restraints, but it was no use.

“So, Agent Jones, you seem to have gotten yourself into a precarious situation!” came the mocking voice of Kwan Lee himself, as he strode across the burning sands towards Samson's helpless body.

“And here I thought that M.U.S.C.L.E. agents were better trained then that! What a pity...”

“Sadly, you will not be able to report your failure to your superiors, as you shall not be leaving this island...at least not as a free man. I have several clients who will pay handsomely for a hugely muscled specimen of Black manhood such as yourself. Of course, we will have to break you of your training and reprogram you to become a willing slave, and the best way of doing that is through intense and prolonged Torture.”

Samson just stared up at his captor. “M.U.S.C.L.E. agents are conditioned and trained to endure extreme torture, so do your worst, Kwan!” he sneered.

“Oh, rest assured, we will. Some of the clients who would be interested in buying you will pay even more for the pleasure of watching as your magnificent physique is subjected to days or even weeks of intense physical, mental, and even sexual Tortures until you break down completely. And now just for a very slight example of what you shall endure, here are a couple of my favorite toys. They are called Spiders, and they LOVE to bite.”

He held up two small metallic objects that in fact looked exactly like spiders with long, curved legs, each one ending in a thin needle. Kwan leaned in and held one of the spiders against Samson's chest, directly above his right nipple. Giving Samson a mocking grin, he pushed a small button on the back of the spider. Instantly, the multiple legs snapped downwards, impaling the needles into Samson's chest, surrounding his thick black nipple!

“UURRGGGHHH!!” groaned Samson as his chest was pierced.

Kwan merely grinned as Samson's muscles bulged and heaved at the burst of pain ripping through his huge chest. Holding out the other spider, he repeated the torture on Samson's left nipple. When he was done, Samson could only writhe as the pain burned into his pecs from the needles driven deeply into the muscles.

“ The needles are coated with a special drug that will help the retraining of your mind through hypnotic control and the weakening of your own willpower. Within a week or so, you will be crawling to me, begging to be trained as a slave to be sold to the highest bidder. Oh, and one other thing, my friend...” purred Kwan, “The chains hanging down from the spiders, and indeed the spiders themselves are a special highly conductive alloy I have developed. They will collect the heat from the sun, and slowly bake your pecs and perhaps even burn your nipples off altogether. But hopefully, I won't have to do that, since that would lower your value on the slave market. I'll be back in several hours to see how you are doing, my friend!”

Smiling unpleasantly down as his helpless, muscled captive, Kwan turned and walked away, leaving Samson bound on his knees, his ebony muscles already dripping with sweat, groaning as the heat and the pain began to build in his pecs and tits. Even though Samson was only 25, over 10 years of hard bodybuilding had developed his defined muscles to an almost inhuman level of strength and size, but even his great strength was of no use to him now.

He was also aware of a slowly creeping mental fog that seemed to be surrounding his mind in a sort of mental numbness, making it harder and harder for him to concentrate on possible ways of escape from not only his current Torture, but from the Slave trader's island itself.

Samson knew that he was in deep trouble... 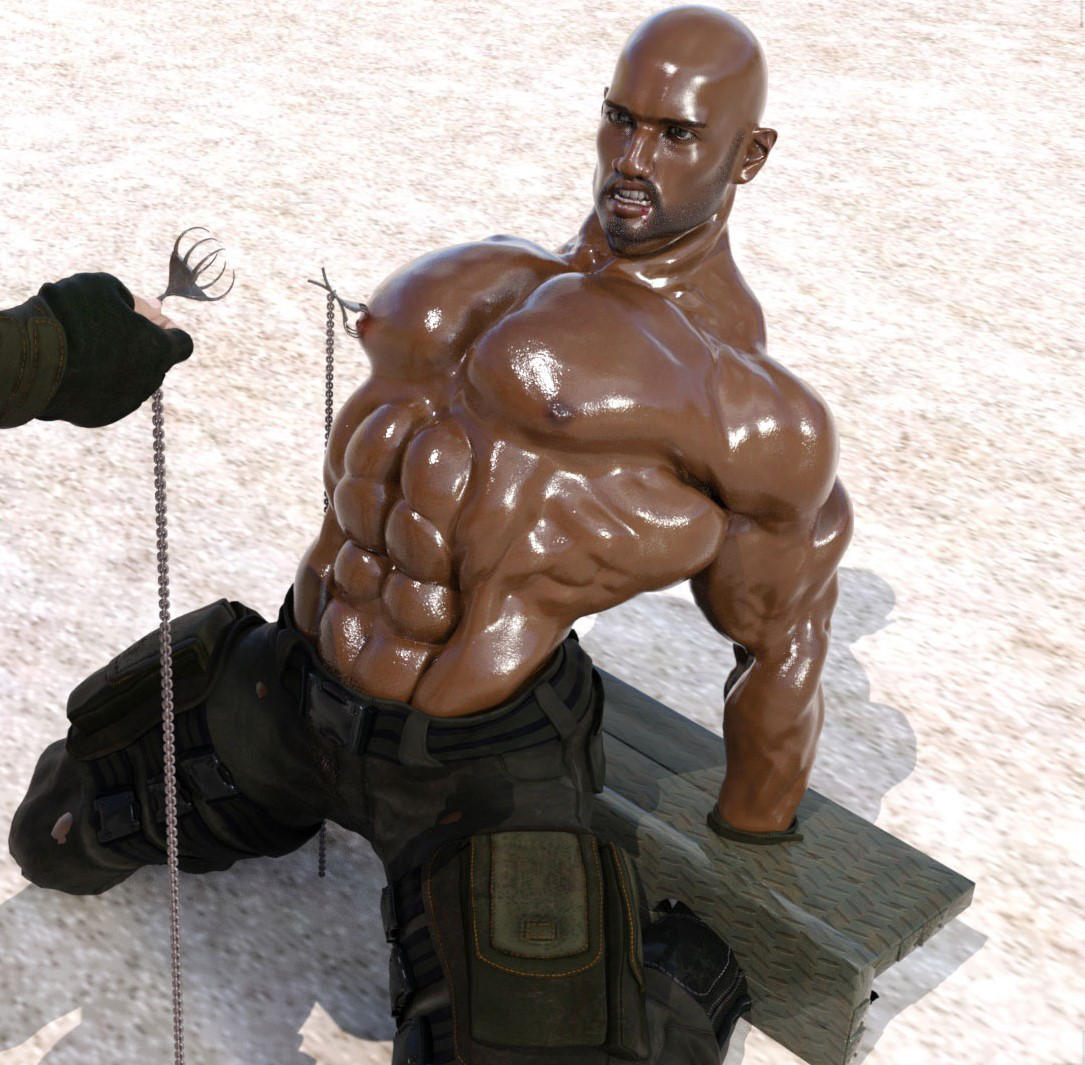