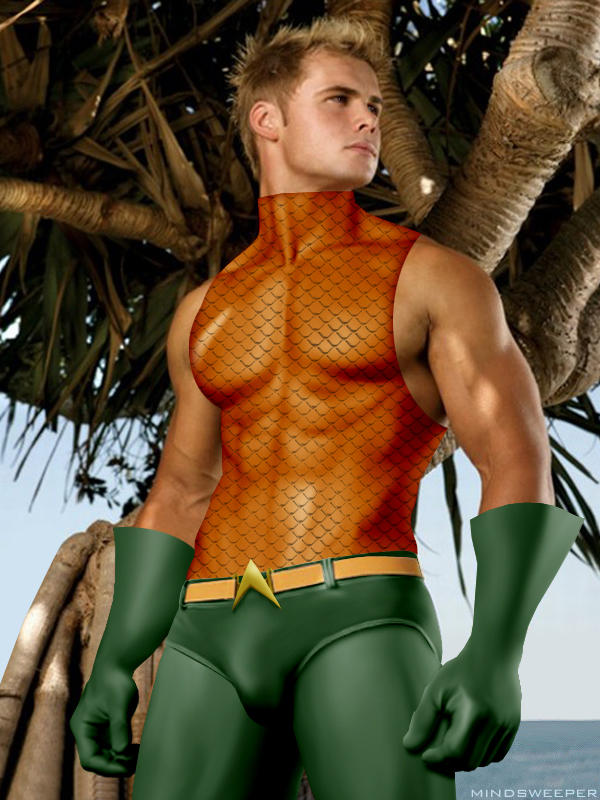 The frame that held him was made of bright silver metal. Anchored to the floor in an arch it gleamed in the bright light of what appeared to be a throne room in an antique castle. The wide plank wooden floors were worn but clean and the room seemed to be quite large although he was uncertain of exactly how far the room extended behind him. In front of him, on a raised platform was an antique golden throne although it looked as though it was made for a very large monarch, far larger than even the tallest human he had ever come in contact with.

The windows, draped in green tapestry, opened to the underwater world that he was so familiar with, pitch black at this depth the outside surroundings made this place, wherever he was, extremely cold. He was also cold in part because he had been stripped to the waist, his tanned, muscular torso exposed to the cold dampness of the brightly lit room. Once again he pulled upon the shackles that held his wrists over his head; spread shoulder length apart they encased his wrists in metal that wouldn’t budge as he tested them. His large, smooth biceps bunched and flexed as he pulled at the manacles. His arms, bent at the elbows broke out in a pattern of veins as he struggled. Through the cold dampness his efforts to attempt to free himself again led to a slight sheen of perspiration to break out on his exposed skin, tanned to a golden brown by the sun drenched beaches of the world. His back bulged and twisted as his arms worked to no avail in his attempt to find a weakness in the device to which he had been fastened.

From behind a room divider the King of the Giant Frog People watched the human struggle. Aquaman, although a friend to all sea life, would never agree to what the ruler of this small nation of creatures needed for him to do. Instead it was necessary to trick him and bring him here, to a makeshift palace in a deep ocean canyon, constructed to prevent the captive from communicating with their sea brethren until after they had from him what they needed. If he survived, they would gladly free him to return to protecting the sea. They could not risk an attempted rescue by any other nation of the sea, there numbers had dwindled greatly in the last months and they would not be able to fight off an attack; extinction was possible unless he acted swiftly.

Aquaman, through his continued struggles, recalled that he had been lured to the depths of this ocean ridge by an urgent call. A natural quake had apparently caused a gas leak in the earth’s crust and the slow moving creatures of the ridge were unable to escape, thousands were in peril and he was needed at once to help move them to safety. Hundreds were dead or dying and the contaminated sea water was overtaking them too quickly. As he rushed to address the urgent call he had received by his underwater sonar he was shot from behind with some sort of tranquilizer dart; he recalled it lodging in his left shoulder as he swam. That’s all he remembered. He had no idea why he had been drugged or by whom and certainly didn’t know where he was or what the intention of his captors was. He looked down at his ankles as he attempted to free them from the manacles that held them to the base of the arch. The musculature of his legs caused his skin tight green leggings to bulge, displaying the strength of his flawless legs. Wide slates of lean quadricep muscle tapered to tight athletic knees and back out again to well-developed calves before once again narrowing at the ankles. His powerful body was helpless in this position, still uncertain of exactly what he had done to deserve this fate. Through frustration he bucked and pulled at the arch and manacles, “What do you want?” He screamed into the cold damp air.