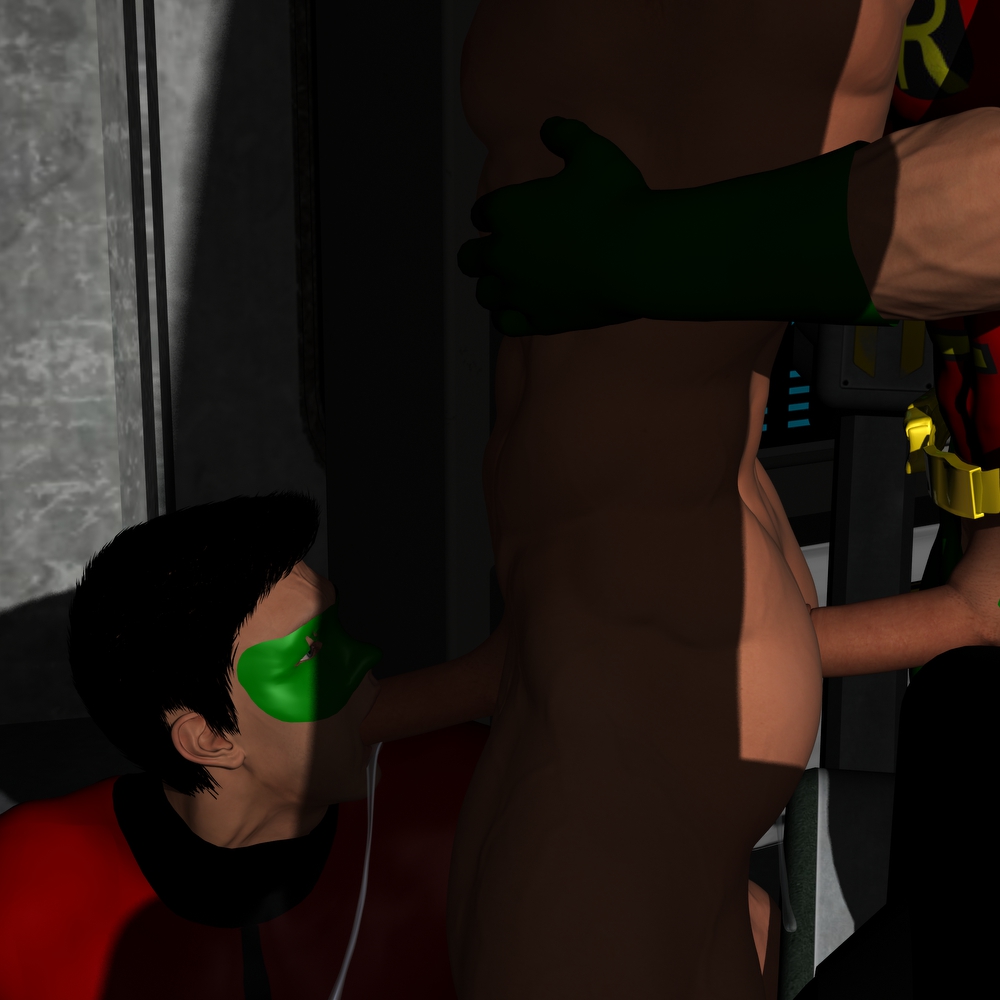 Batman screamed put in pain into the gage. He had never dreamt he would go through something like this especially at the hands of his most trusted sidekick or whoever this was, he wasn’t sure he knew anymore. Batman's screams didn’t stop one of the Robin's from pounding the hell of out of Batman's ass, while his new look alike worked over the hero's cock.

As Robin continued to slide his cock in and out of Batman tender virgin ass, all he could do hang there and take it, while his insides were being torn up. He was being broken not only physically but mentally as well. He had no clue why Robin was doing this to him, after he had done so much to help him, but there was more to the feelings he was experiencing. He somehow in some small back part of his mind was finding some enjoyment in this and it was frightening the hell out of him.

As the pounding and sucking went on there were three men all joined together, with a very large amount of sexual energy flowing through them, building to an ultimate ending? All three of them had something building deep within that they could not stop, that were all heading for a massive explosion.

For Batman it was the beginning of the end only he had no clue what was in store for him. 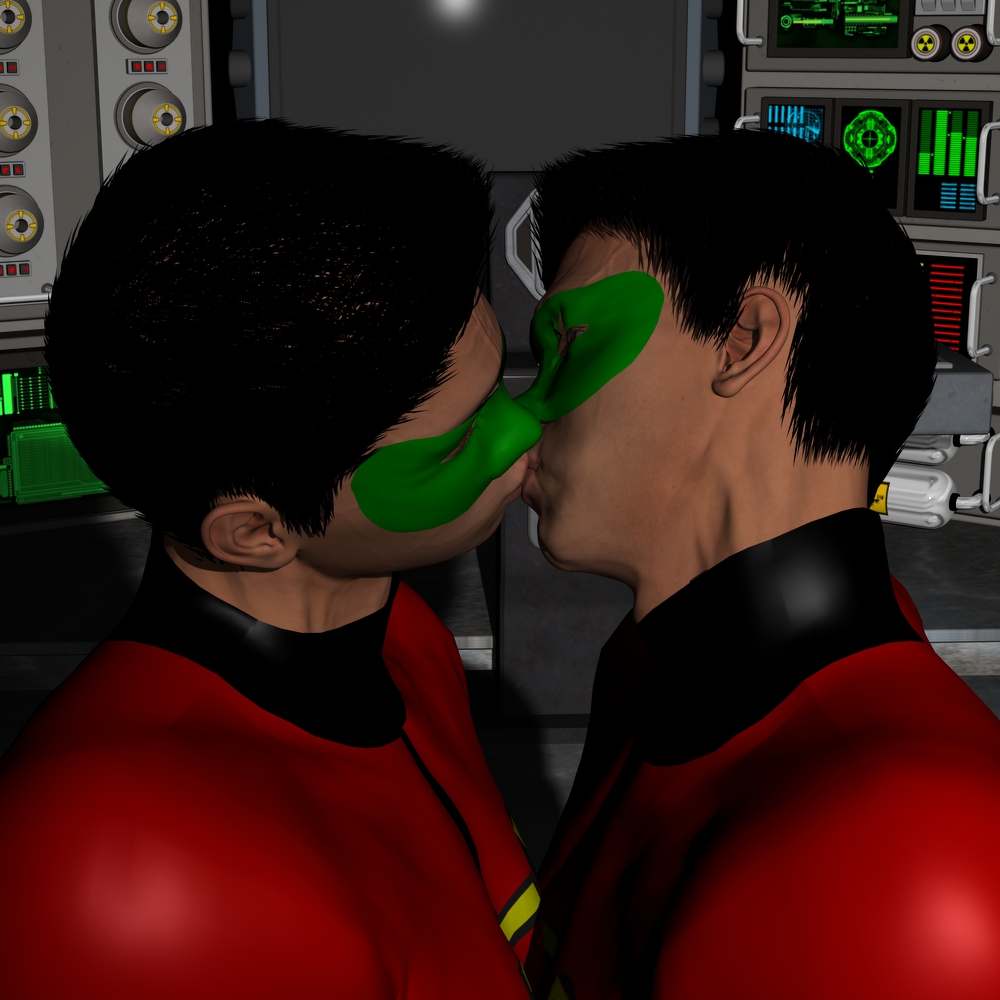 After they had finish playing with Batman, the two Robin's watched as the machinery moved in and rooked the needed samples from Batman, just as they had from Robin earlier. As they watched the original Robin said, "Dam, bro, I knew that was painful when I went through butting seeing it almost makes it worse."

"Yeah, but aren't you glad you want through it and are going through these changes for the better?"

"Yes for sure, but I was thinking if I am going to become Batman, I will become as big of jerk as he is!"

"Never fear, the hood has a program and I will adjust that and mix it with the real Robin, you will be golden when all is said and done!"

"Awesome, then we are all set, we just need to decide what to do with Batman."

"I have that taken care of already as well; I think you will enjoy what he becomes."

"You have thought of everything!"

Finally the samples were done and loaded into the other computer. The two Robin's stood facing each other. The new Robin said, "You ready to do this?"

The original said, "No turning back now!" As he leaned in to give his double a long passionate kiss. 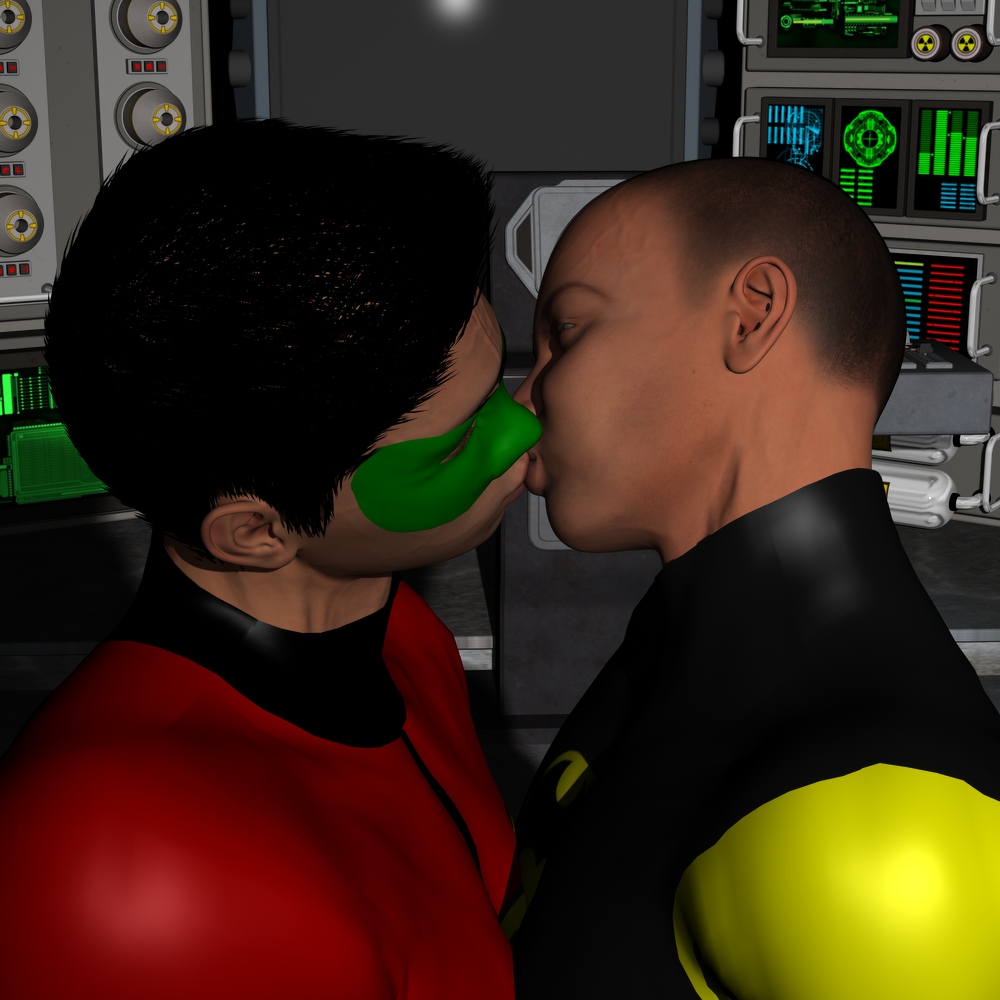 The original Robin broke the kiss, getting into the chamber and putting the hood on, as the New Robin closed the door and prepared to start the sequence, which would give him a new Batman. It would copy his physical body exactly from the original, but the New Robin made some adjustments in the area of memory and personality.

The new Batman would have all the knowledge and experience of the old Batman, but they would be mixed with Robin's. The Doctor had worked hard to bring Robin's true feelings to the surface, and it was important those stayed intact on their own. What he did weed out and eliminate were there overbearing traits of Batman. He wanted to be the leader and have Batman follow him, which is exactly how he programmed the hood. The other thing he did was to plant the seeds to have Bruce Wayne sign over 51% and controlling interest to his protégé, Dick Grayson, so he would have all the money, power and control him ever wanted. It was a truly brilliant plan.

The computers and machines did their work in about two hours. When the new Batman stepped from the tube, his new uniform was waiting for him, which he slipped on, feeling renewed with an amazing energy and feeling of power he never had before. Of course Robin was standing there watching and waiting for him. When he was almost fully dressed as Batman he walked over to his new partner.

The two looked each other in the eye, "Thank you!" was all Batman said as he again gave Robin a long passionate kiss. 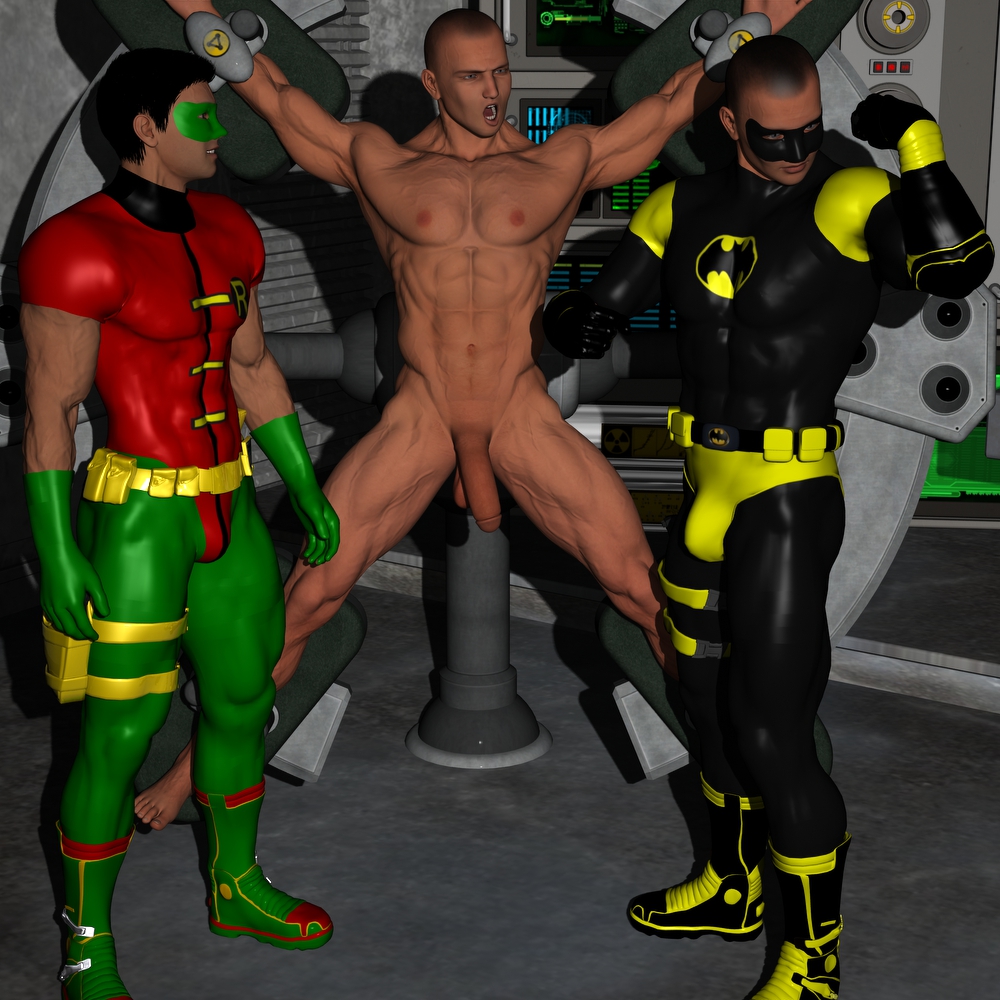 Sometime later, the original Batman began to wake up not believing what he was seeing. I was Batman and Robin, but how could that be he was Batman, he was Bruce Wayne, yet there he was standing before himself. First there was two Robin's and now there was only one, but there was another Batman, he had no clue how any of this was possible.

Robin took charge of the situation, "I can tell you are confused Batman, and rightfully so."

"What exactly is going on here? How is any of this possible?"

"To be honest it is all made possible thanks to you and Wayne industries, or should I say him now." Pointing over towards the new Batman.

"What are you talking about? Explain yourself now!"

Robin went through a complete explanation of how and what was done, of course it infuriated Batman. "I demand you let me go now and give yourself up and reverse all you have done here."

"Nothing is being reversed, and I am afraid we are not done yet."

"What do you mean by that?"

"Well first I have some news for you, but maybe I should let the new Batman tell you?"

"Well, I have decided to make some changes, well in fact I already have made some changes at Wayne Industries."

"You can't make changes, I am the only one that can do that?"

"That’s where you are wrong, I can and I have, after all I am you! There were not many changes in fact only one on my part. I have decided to bring in a partner, someone to do the things I don’t have time to do, I want more time for fun. So as a result I have signed fifty one percent of Wayne Industries interests and personal holdings over to my new partner."

Batman was furious. "You have done what? You can't. Who is this person?"

"Well I am afraid it’s a done deal and who else would I pick besides Dick Grayson here, my trusted partner in all things now!"

"Him, you signed half of my company over to him! I won’t stand for it."

"I have and it’s done." The new Batman said turning to Robin. "Let’s get on with the next part; I am getting so sick of him."

Batman was furious and continued to protest as he was forced into the conversion tube. 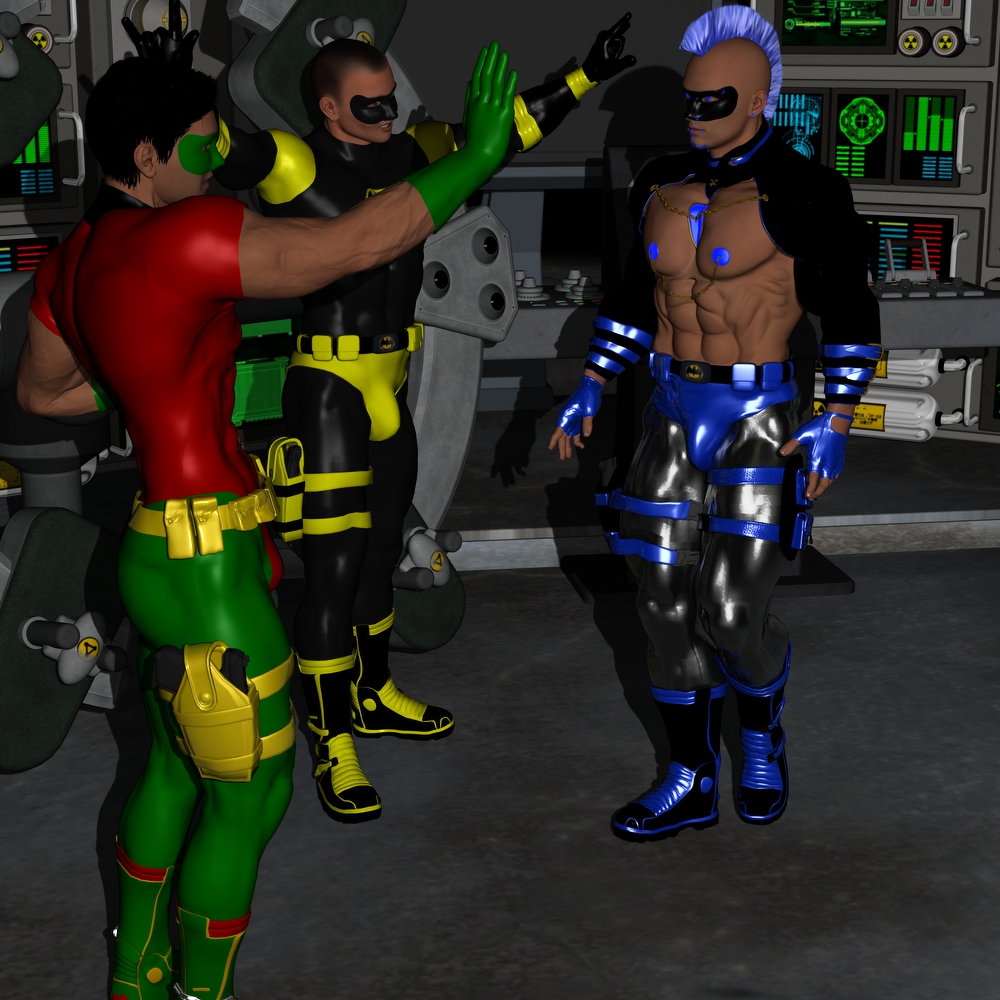 Once they had the original Batman, Bruce Wayne, securely in the conversion chamber, Robin activated the sequence. Both of the heroes could not wait to see what came out of the tube physically as they both had a hand in the genetic manipulation. This is the first time that this type of conversion had been tried, but they figured why not try it out on Batman, if it didn’t work they figured it would be no loose.

They had used material from three sources when they selected this new guy’s body. The used DNA from Both Dick Grayson and Bruce Wayne, taking the best of both and enhancing them as they went along. Now as far as that was concerned, the new sidekick would be nothing like Batman or Bruce. He would be wild, fearless, sexual, and when they said sexual they programmed him to never have enough and be a willing partner in anything. In essence he would be a sexy slut with few bounds.

When the process was done, the tube opened, with a magnificent creature standing in the door. Batman said, "Well I think we can call this one a win."

Robin agreed, telling the new sidekick, who in real life would take the name Timmy Hill and his hero persona would be known as Blue Danger, to step off to the side and get his suit and gear on and the join them in the other room.

When Danger walked into the control room, Batman and Robin were taken a back at first and left almost speechless at what they had created out of the former Bruce Wayne. Both of them felt their cocks jump at the thought of their new sidekick, on that they had total control over.

"Dam, Robin, you outdid yourself!"

"Thanks Bro! How you feeling Danger?"

Danger hesitated for a minute. He was clearly excited, as he started to run his hands over his own body. "I feel amazing, this body is amazing, the things I can do with it are endless. I am here to please you Sirs; I am at your service."

Batman and Robin looked at each other impressed, "Looks like we did well!" Batman said. 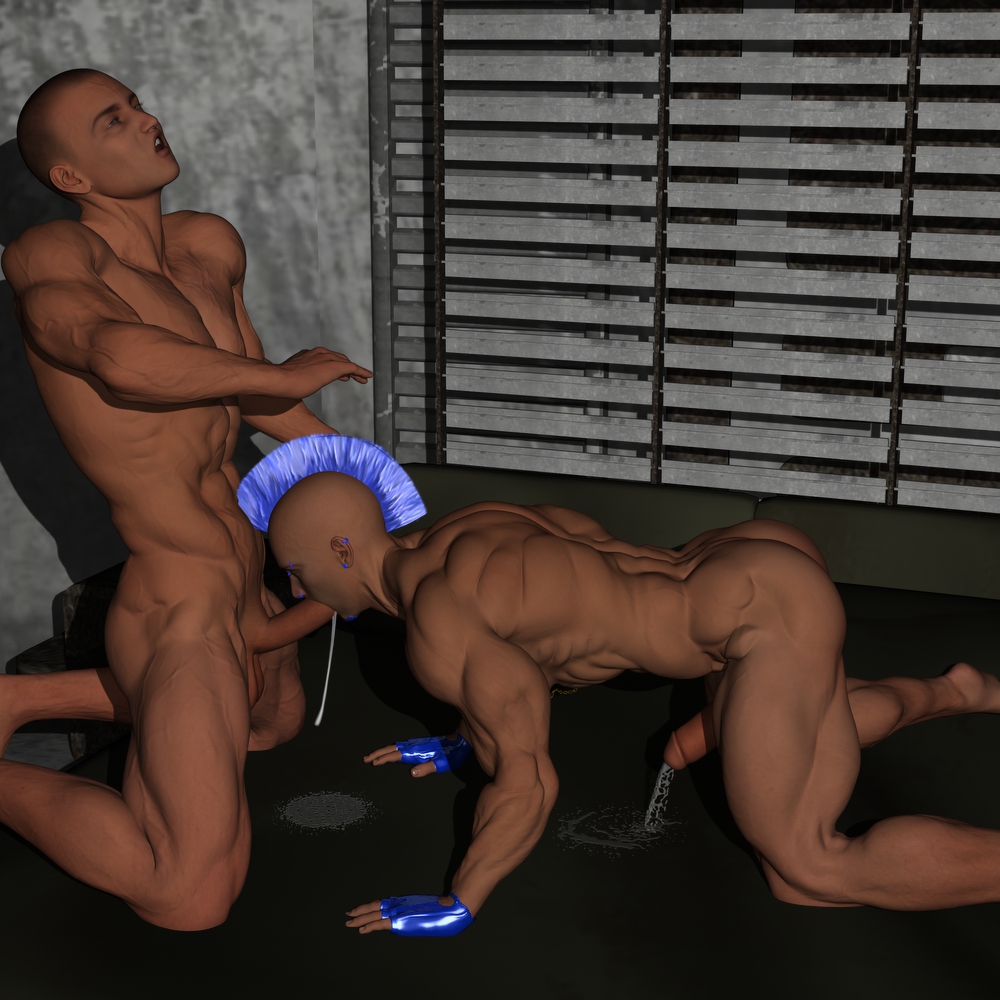 There was an added benefit; Danger was a great addition to the crime fighting team as well!

Also huge Thanks to fellow author, Kyle Ciero, for all his help and advice on this story!

Please feel free to comment on this and all my stories and art; I accept both positive and constructive comments, to help better my work. Your comments are the only way we get paid.

Thank you. The End 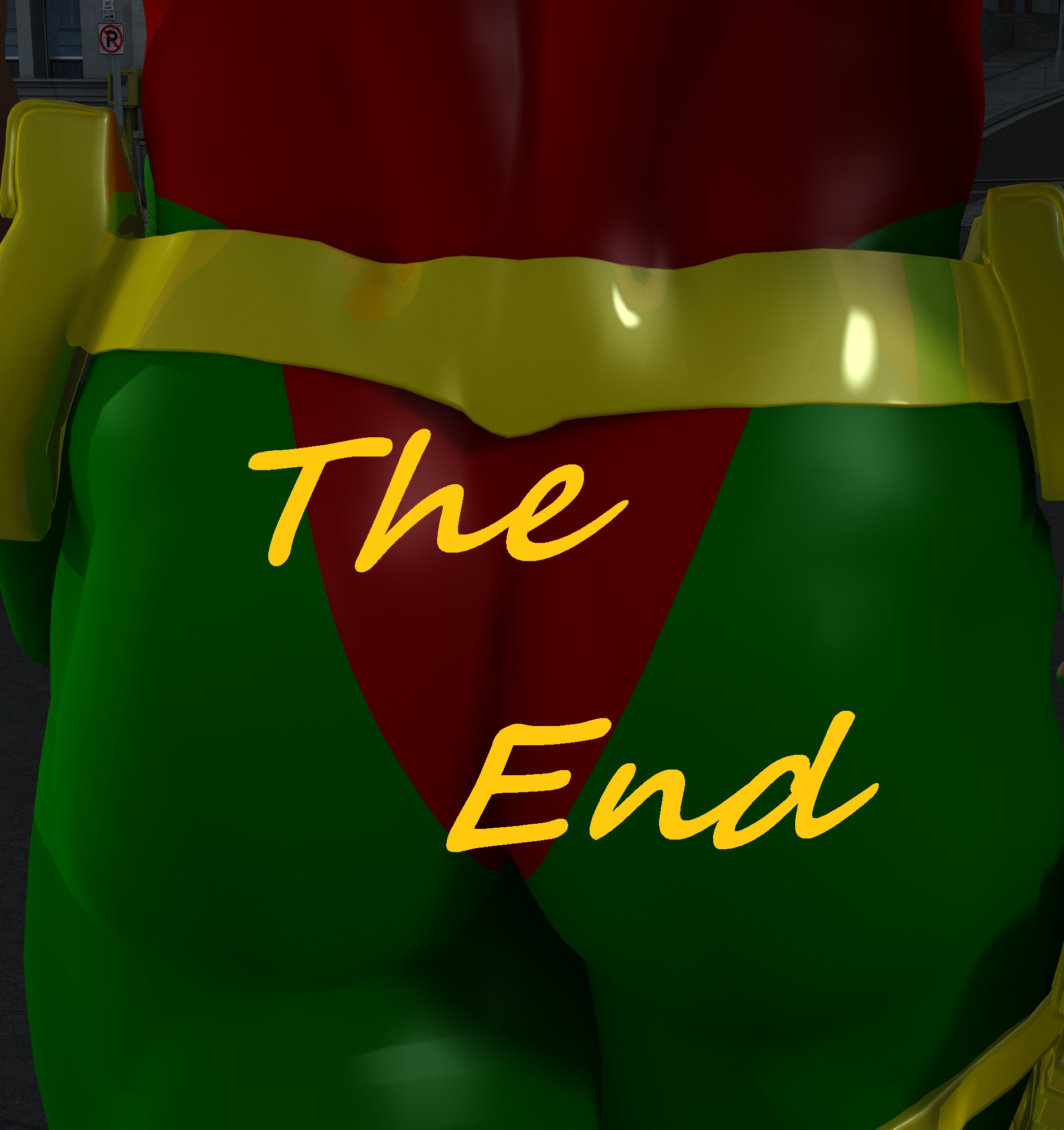