The Price of Freedom

Gang leader Ty sits in his cell awaiting trail with no hope of getting out, however he is taken to a meeting room and is offered a way out serving time, however is this straight muscle thug willing to go through with such an offer? 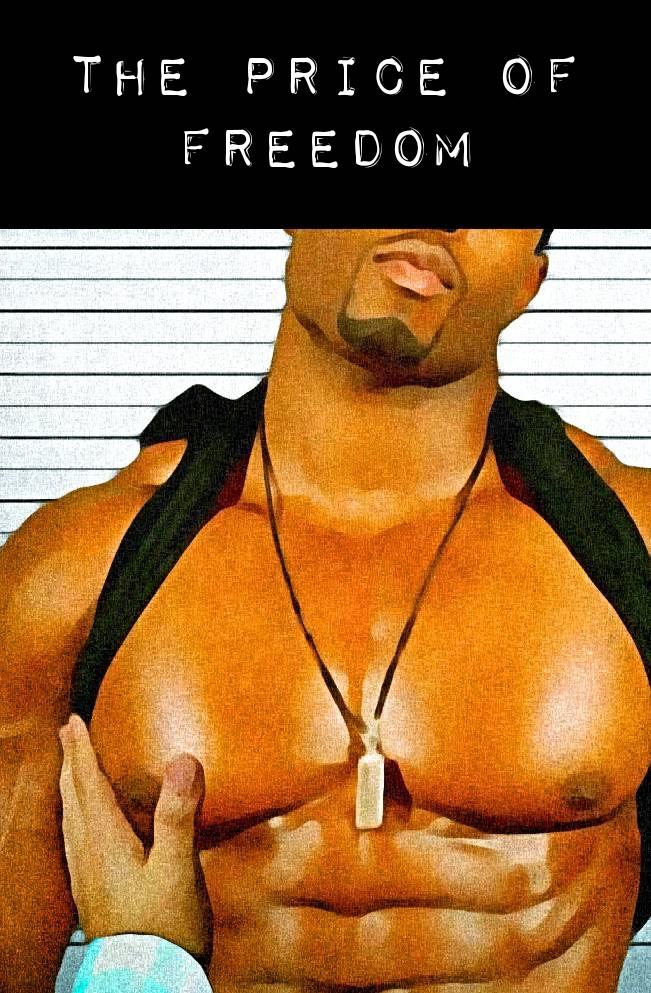 Ty sat slouched in the jail conference room. His muscular legs spread as the orange jail issued jumpsuit was pulled down to his waist. His white wife beater was stretched over his massive pecs and chisel 6 pack. He was surprised when he was told that his lawyer wanted to see him. His gang and him were busted on drug charges. It was his third strike and he knew that he would be sent down for a long time.

Ty didn't bother to get up when the guard opened the door, he watched as a short balding chubby man entered. Ty noticed the man’s expensive tailor suit and gold Rolex watch. The young man immediately knew that this was not the free lawyer the state had provided him with. The lawyer was rich, way out of Ty’s class. However, Ty showed no outward sign of being impressed. He remained despondent and looked uninterested.

“Hello, I am Edward Thomas. I will be representing you,” the lawyer said as he opened his leather briefcase while pulling out case files, he sat down across from the thug. Edward couldn't help but to admire the tough black muscle stud sitting across from him. His bulging dark muscular shoulders and arms were in full view. His pecs were obviously very large even though hidden under the tank top, he could also make out his nipples that were teasingly pointing out of the fabric of his top. He loved how the stretched white tank top contrasted with the thug’s brown smooth skin but he would have loved to have seen him topless to see it all. Even though he had no tattoos compared to the other gang members, He still was dangerous looking which made him even more appealing. He was equally handsome in a rough way with his goatee beard and luscious lips.

In fact it was his mugshot that caught his attention while he was going through the cases the police station had. He knew he was onto something and arranged to meet this thug.

Ty smirked. He noticed the lawyer was checking out his body. The man was definitely a fag. “I already got a lawyer n' shit. what tha fuck happen ta them?” Ty stuck his left hand in his jumpsuit and scratched his crotch. 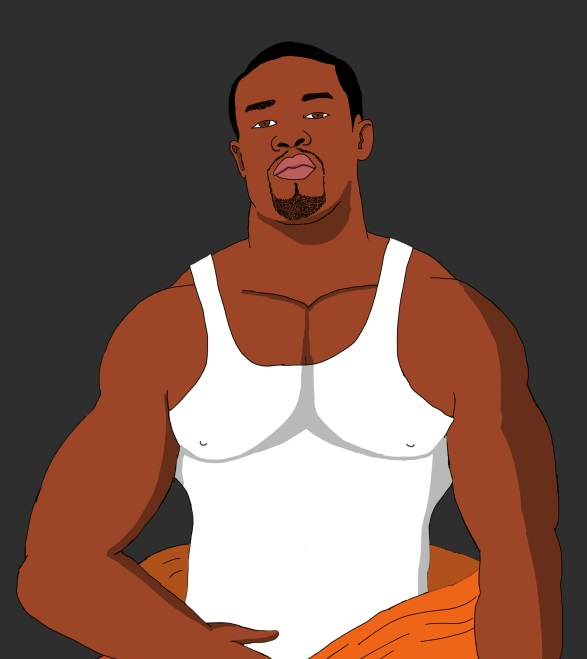 “I'm afraid your attorney had resigned. I don't think you know how much trouble you are in. The state prosecutor is going after you as the ringleader of your gang and he is already looking to cut a deal with the other gang members to set you up. Plus this will be your third strike.”

“Fuck that shit, there is no way mah homies will rat me out.” Ty replied. His gang was tight ,if anyone did that and was found out, their life in the projects would be forfeit.

“You sure Mr Dewit? Asked Edward. “All of your gang are looking at least 10 years each in prison. However once they cut the deal with the DA they will testify against you and all will serve the minimum sentence of a year and you will serve all of it.”

Ty slouch further down in the chair, “Fuck man.”

“But all is not lost Mr Dewit, you have a life line due to your… unique qualities compared to your other gang members.” said Edward.

“You thinkin you can git me off?” ask Ty, not understanding what the lawyer meant.

Edward tried not to stare at his client's crotch. “Judge Giles will be the presiding judge in your case. If you play your cards right, you can get off with only parole and some community service.”

“Parole?” Ty sat up and laughed. “What shit are you smoking?”

Edward ignored Ty’s outburst. “If you cut a counter deal I can arrange a private meeting between you and Judge Giles,” Edward spoke low to be discrete.

“Not technically. However, the judge is a very powerful man and if you satisfy him he would make sure your deal with the state prosecutor will be the one used, you would still need to go to trial, but as he will be presiding, you will get parole.”

Ty sat back, “satisfy? What the fuck you mean by that?”

“Let’s say the judge enjoys the company of muscular men like yourself,” Edward whispered.

Edward put up his hand to quieten down the larger man. “If your gang members deal goes through, the DA will insist you go down with the harshest sentence, your are looking at a maximum of 20 years in a federal prison. The current political environment is very tough on crime and criminals like yourself. A man like you needs powerful friends like Judge Giles. The judge is also very generous.”

That will make you even more desirable to the judge, Edward thought to himself as his eyes moved over the muscular black man. He responded "Mr Dewit, please consider the offer, this really is the easiest and best leverage you have."

Ty thought about his situation. He was repulsed about the idea of having sex with a man, a older man at that. But compared to what the alternative was lying in wait for him, it seemed it really was an easy choice.

“Good, you are a very smart man. I will arrange the deal with the state prosecutor and the meeting with the judge for tomorrow,” said Edward. The lawyer got up to leave the room. Edward tried to hide his amusement. The thug probably thought that he would be the one getting the blow job and doing the fucking. He soon would be in for an awakening.