The Telemachus Story Archive
Jungle Boy Into The Pit Of Eels
By Jotto (Illustrated by Jotto)
Email: Jotto

“Jungle Boy into the Pit of Eels”

It was day eighty-two of captivity for the jungle boy with no name.  Eighty-two days spent tied up to some bizarre contraption, eighty-two days of being tortured, allowed to heal, and then tortured again.  But only eighty days since his will was crushed, forcing him to accept his new existence.

Day eighty-two was preceded by the usual few days of healing at the end of an unforgiving dog choke collar made of crude chain at the end of a heavy leather leash.  His hands were always roped behind his back.  The other end of the leash was usually occupied by a firm hand of one of the many henchmen that were employed by the mysterious owner of this tropical isle.  And like some favorite pet, his owners took him for exercises and jogs through the woods, both to insure he remained aesthetically pleasing to his captors and to be fit enough for whatever sadistic challenge awaited him.  The men swooned at the sight of the naked wild boy exercising and jogging, voluptuous musculature that undulated under his young flesh and an exceedingly copious set of genitals that bounced and swayed wildly with even his slightest movement.  He had to compete for his share of dog food by fighting with the rottweilers that he shared a bowl with.  The dogs usually thrashed him into submission, forcing him to wait for what scraps the beasts left behind.  And at any time of the day, he would be repeatedly sodomized by any and all of his captors.  But day eighty-two held a new thrill for or ravaged and defeated lad.

On this day, he thought he was being lead back to his dungeon cell until an unexpected turn took him down an unfamiliar corridor and up to a large metal grate in the middle of a dimly lit room.  A pair of shackles hung from a rusty chain directly above the circular grating.  A number of the henchmen gathered around the boy and held him as his restraints were removed only to have his wrists placed in the shackles high above his head.  One of the men turned a crank mounted to the wall, winding up the chain until the jungle boy’s toes dangled just above the grate.

The men spread out to a wide circle as one of them grabbed the uncivilized youth by his balls and swung him over to another man at the far end of the room.  That man would catch him by his manhood, and using his brutish grasp, fling the swinging slab of naked beef over to another.  Each catch caused the boy more and more pain and his screams got louder and louder.  They kept up their sadistic game of catch for hours, invigorated by his cries of pain, until the unruly crowd had worked up a heavy sweat.  And when finally tired of their game, “Catch the Boy”, the crowd of burly men took turns banging away at their muscle bound piñata, fucking his unresisting asshole with their huge cocks and brick-like fists.  The jungle boy had learned the hard way that any form of protest was severely punished.  So, like a good sex slave, he hung there quietly as each of the men pumped their pearlescent load up his ass.  The endless copulations had the effect of brainwashing the jungle boy, causing him to even enjoy the endless gang banging of his deflowered ass.

Hours later and with gobs of semen dripping from his ass and running down the inside of his legs, the henchmen lowered him to the ground and took a firm hold of him as his wrists were unshackled.  The boy was moved aside as six men lifted the heavy metal grate, reveling a deep pit filled with slimy water that churned with unholy life forms.  The jungle boy’s eyes took a moment to adjust to the poor lighting but were soon able to make out the creatures deep beneath him, electric eels.  And these weren’t any eels he had seen before, but mutant monsters genetically enhanced by the evil men that ruled this island.

The men started to cheer wildly.  The boy felt his body being pushed to the edge, he tried to resist, but the men out numbered him and each was stronger than he.  The boy struggled with all his might and could only protest with grunts and screams.  The men teased him to the edge repeatedly, only to pull him back at the last second.  Then all became still as their lord and master walked into the room.  With a simple gesture of his hand, the boss directed his men to bend the jungle boy over.

“Present him to me, gentlemen.” The lord of the island commanded.

As the well-dressed leader unzipped his trousers, the henchmen positioned the jungle boy’s muscle-bound ass in front of him.  The boy’s voluptuous buttocks rippled with the well-developed musculature that lay just beneath the tight layer of tanned skin.  His glory hole quivered with anticipation.  The lord and master whipped out his equally impressive member and without hesitation, started fucking the somewhat willing lad.  In fifteen minutes, it was over as he pulled his cock out of the jungle boy’s ass and shot his load across the boy’s back.  Semen trickled down through the muscular terrain of the lad’s body as he stood up under the supervision of his masters.  The well-dressed man gathered himself as he examined his naked prey one last time.

“You are beautiful, and even after everything I’ve put you through.  Well, let’s try to change that one more time, my comely youth.”

He walked over to his thrown near the edge of the pit, turned to his followers, held out his hand and turned his thumb down.  The men cheered loudly again as they lifted the boy above their heads, spent cum that coat the youth’s body rained down on the men beneath him.  The jungle boy’s ample manhood slapped either side of his waste as he struggled in vain against the wave of masculinity that swept him away.  The lord of the island gracefully took his seat.  With swift precision, the men flung the flailing lad high into the air and down into the pit.

The jungle boy’s yells were stifled as he splashed down into the murky waters.  He quickly found his footing and made a run for the edge of the pit.  He leaped up to the rim of the pit as the grating was being put back in place.  He felt the heavy metal coming to rest on his fingers and let go before his hands were crushed.  The boy fell backwards into the water that was more alive than before.  He desperately scanned for a way out as the slithering forms gathered around his legs.  He kicked one away only to have two take its pace.  And then as he punched one of the eels, it hit back with a massive electrical charge.  A wave of pain caused him to curl up and fall face down into the water.  The cheering from above paused briefly as the boy disappeared into the water, dragged down by the eels.

Then the water lit up like a light show, illuminating his entangled form that lay flinching just beneath the surface.  The increasing concentration of eels forced the youth’s body above the water ass first.  As his glory hole emerged, one eel took aim and jutted up in to his defenseless asshole.  Bolts of electricity shot out from his ass, the pain of which caused the wild lad to rear up, screaming with blood-curdling fervor.  The boy tried to grab for the rear-ending eel, but his arms were tied up with his friends.  The pressures of the eel’s thick body up his ass and its electrical discharge forced an erection out of the wretched youth.  The eel’s further squirming induced a monstrous, unending and nut draining orgasm.  As he choked on his screams, another eel crept up his body.  As if annoyed by the noise from the despondent lad, that eel reached up and swiftly swam down the boy’s mouth, halting his hysterical chorus.  The jungle boy gags on the eel to the point of vomiting and chokes on his morning meal.

The hapless boy claws at the beast, but the creature is too slimy to grab a hold of and defends itself with an electrical discharge of its own.  The ass bearing eel has worked its way past the boy’s colon and up into the deeper reaches of his body while the eel shoved in his pie-hole continues its migration down his throat.  And somewhere in the middle of the boy’s body, the two alpha-male eels meet and battle for dominion over their new and young territory.

As if trying to get at the dueling eels, the boy claws and hammers away at his stomach in a useless attempt at quelling the beasts within him.  Then a third eel slithers up from behind and wraps itself around the boy’s neck.  The eel constricts around the boy’s neck, closing off what little airflow was left.  Without a breath to take, the jungle boy’s body relaxes as his vision fades; the cheers from his audience become a faint echo as his throbbing cock purges the last of his semen.  And as his thoughts dissolve into oblivion and his body slips under the slimy water, he takes some solace in the hope that his tortured existence has come to an end.  However, unfortunately for him, eels don’t like the taste of human flesh, all the henchmen know C.P.R. and day eight-three is just around the corner. 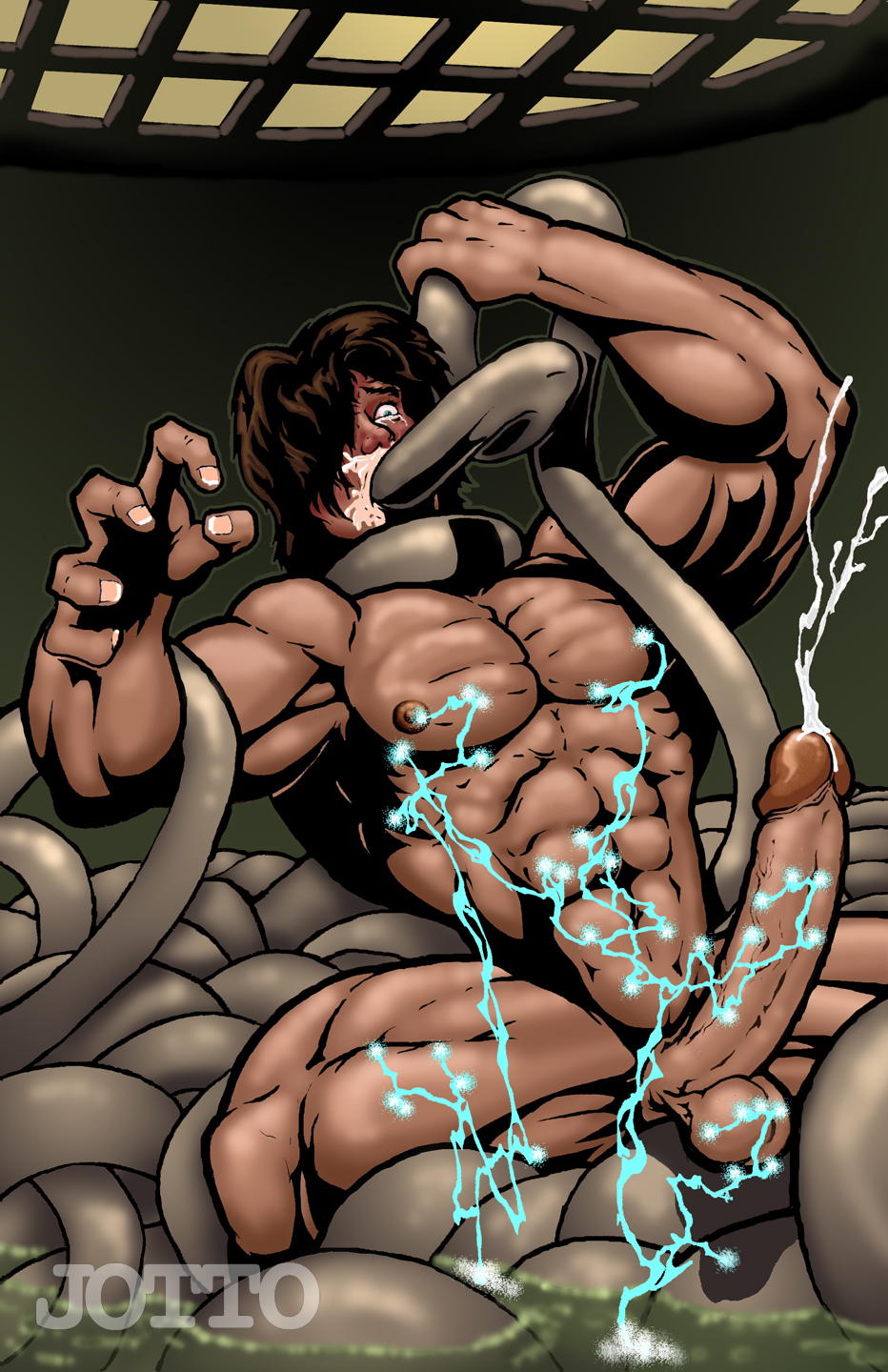