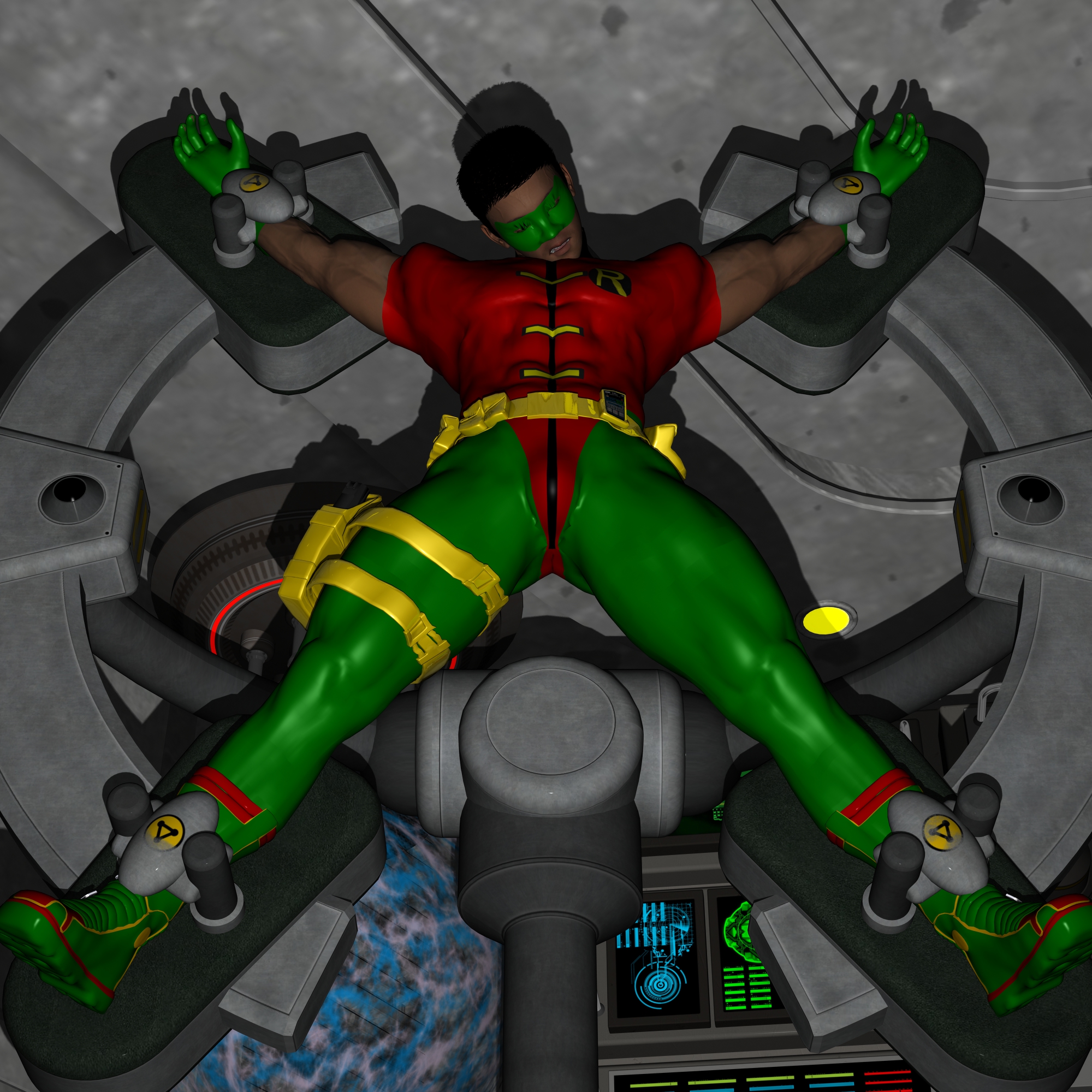 It didn’t take long for the two of them to get back to their destination. Robin was still out from the fight as the metal man dumped his body on the floor of some kind of room filled with odd looking computers and devices, with a thud. The sudden blow to the floor cause Robin to stir slightly and let out another moan, this time it was not one of pleasure but pain.

The villain pushed a couple button on the control panel and a round ring table of sorts moved into a vertical position. Once it stopped he picked up the hero, beginning to strap him onto the table by the wrists and ankles. It didn’t take long to get him secured to the table. Once the pads were locked in place there was no way he would be getting g free unless he was released.

Again the clearly aroused villain took some time to admire and caress the taunt hero's body that was now clearly displayed. He had a better view of it from all angles now, as he walked behind Robin, he could hardly resist touching the hard round firm ass that was before him. The touch clearly again had an effect on both. The silver villain grabbed his own crotch to begin giving himself pleasure. A sign that whatever this being was he clearly had some human traits and he was clearly a male.

The touch to Robin's ass cause Robin to begin to stir slightly, as his head rolled from side to side and he muttered some words that were undiscernible, but clearly pleasured him as a smile came to his face. This pleasurable exam of sorts came to a sudden end. He snapped to attention again, leaving the room almost instantly. Robin was now alone, tabled and beginning to come around. 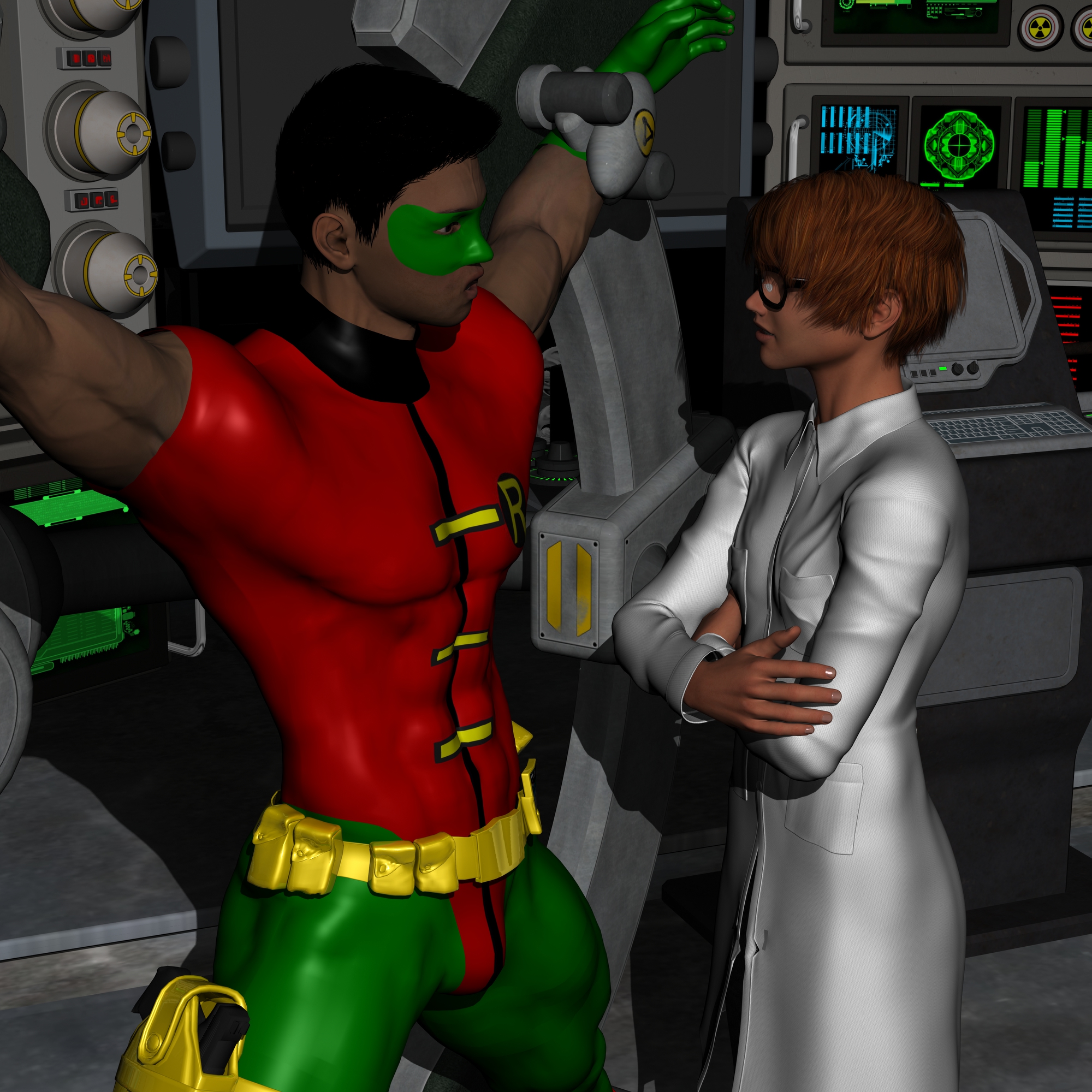 It took a while but soon Robin was fully awake. He had no clue where he was as he looked around the room. He tried to move his arms and legs but he soon came to the strake realization that he could not move at all, it was useless; he had been bound to some table in some strange room that looked like it might be a laboratory.

He jerked and pulled at the bindings that held him in place, but it was useless, even his superior muscles were not strong enough to break free. He stopped trying to break free, thinking, If only he could reach the communicator that was still on his belt he could get a signal to Batman, but that would also be a futile effect as his hands were not moving anytime soon.

His anger was now beginning to build, no one, no one ever did this to him and it was not going to be done now. He began to yell to get someone’s attention. "Hello, I as anyone here! I demand whoever you are, you release me this instant. Do you know who I am?"

Robin called out things like that for several minutes when a door opened. He expected to see the man made of silver, but to his surprise it was not. It was a small younger man that walked in. He was wearing a white lab coat and thick glasses. He was a slight man, thin, no muscles at all to speak of. Red hair with freckles, all he needed was the plastic pocket protector and he would have been a full blown nerd.

Standing directly in front of the helpless hero, "Ah Robin, I see you woke up from your little nap, you were out for a long time. I am afraid my assistant tends to get slightly carried away at times. I will have to speak to him about that."

Robin snarled back, trying to show strength even in his current predicament, "Who are you? Are you the one responsible for this? I demand you me out of here now!"

Robin was clearly angered, "You little son of a bitch, you are going to pay for this, I promise you that. I have both the brain and brawn to take care of you, you need to start answering questions and let me the hell out of here."

"Oh Robin Robin, your threats mean absolutely nothing to me. You see things are different now; you can’t use your body to save you. Also you don't have the benefit of daddy Bats to save your sorry ass. Now to answer your questions. No, I can't let you out of there yet, and yes I am the one responsible for bringing you here. Lastly I am disappointed you do not remember me, we met once before."

"When did we meet, I don't have a clue who you are, did I help put you away; are you some sort of low life criminal?"

"Hardly, I can see my assessment was right, the brain is not as good as the body in this case, and maybe we can fix that."

"I demand you let me out of this, this, whatever this thing is, now, whatever your name is."

"I don’t think you are in a position to be demanding to much right now Robin. Oh and you can call me Doctor. That is good enough for now."

"Let me go now!" Robin yelled as he jerked and pulled against the rigid bindings that held him in place as the Doctor smiled at him as if to taunt him even more. 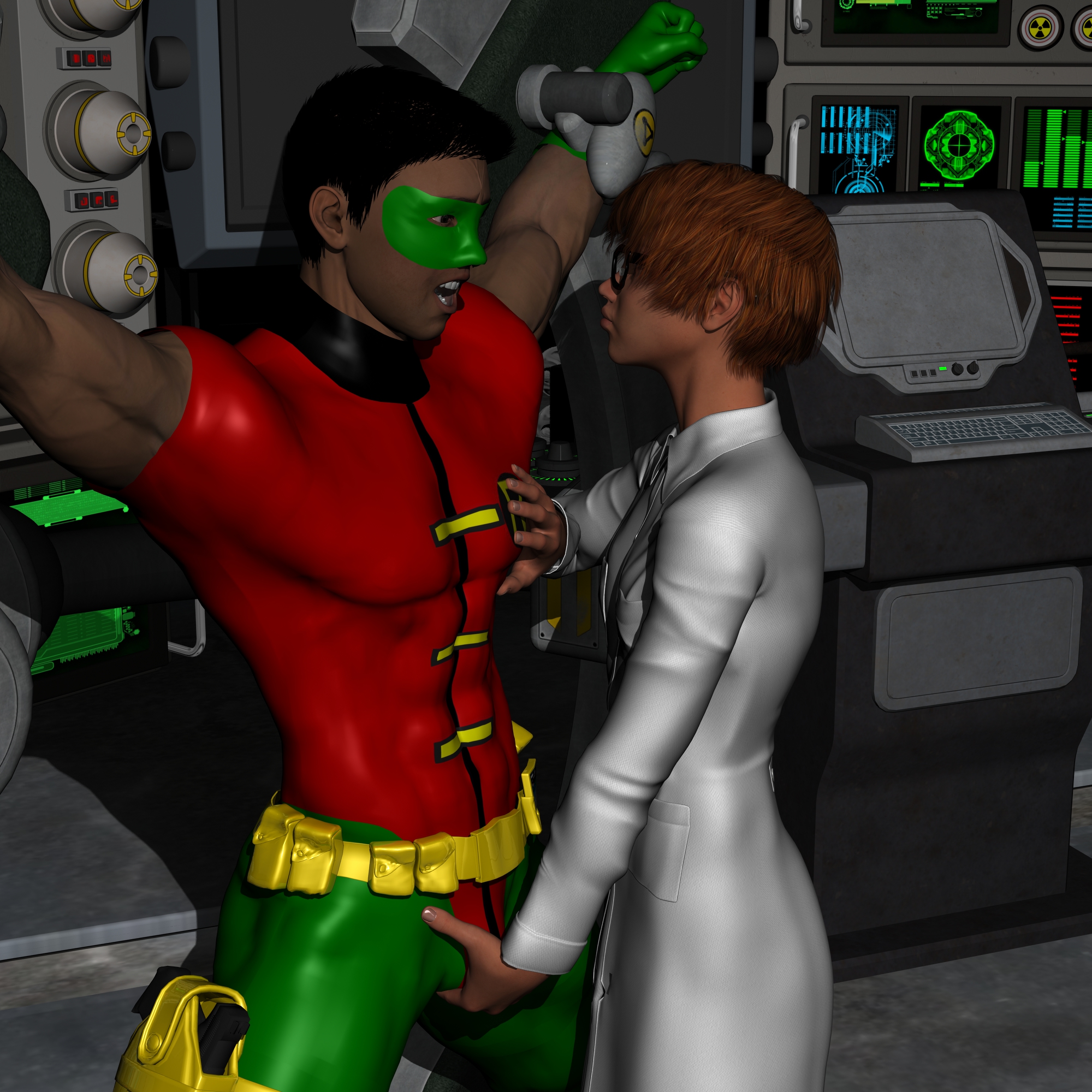 The Doctor didn’t say anything as he stepped even closer to Robin looking him straight in the eye. It caused Robin to stop demanding his release as he was confused by what was happening this was not something he expected to happen. He was so close him; Robin could feel his warm breath on this face. "I think it is time we get this started, I want to have this all wrapped up by the time Batman gets back."

"How do you know Batman is gone?" Robin asked wonder how he knew.

"That is easy my friend, Bruce Wayne is negotiating a contract for a new product I developed overseas and of course you and I know where ever Bruce Wayne is, Batman is. It's just like where ever Robin is, so is Dick Grayson."

Robin's mouth fell open, no one knew their secret, they were always so careful, and how could this little nerd know their true identities? "Who the hell are you and how do you know so much?"

The Doctor took on a seductive and sexy look and posture as he raised his hand to gently run it over the strong muscled for arms of the hero, taking his index finger tracing the veins that stood out on top of the muscles. When he got to the shirt sleeve his fingers gently slipped inside making contact with the hero's arm pit. When that contact was made, it caused Robin to react what was going on.

"Get your hands off me you sick son of a bitch, I am not like that, I am not gay. Dam you stop! Now!"

The Doctor did not stop; he now moved that hand to the hero's neck and down to his chest. It was impressive to say the least. He could not help but admire it; it was broad, strong and muscular. He traced the outline of the pectoral muscles finding the left nipple. He took it between his two fingers gently rubbing it at first in the fabric, gradually increasing the pressure. He knew he was getting to Robin with this; it was just the start of what he had planned for the downfall of this hero.

Robin again said, "Stop, Stop now I demand you stop dam it." This time there was a difference, he was not as forceful and there seemed to be a tone of lust in his voice.

"Oh Boy Wonder, you cam protest and say you want me to stop, but you words do not explain your bodies actions."

At first Robin didn’t understand, at least at first. Then he felt the Doc's hand begin to massage and caress his cock through the fabric of his suit. He was quickly hard and almost fully aroused. He had no choice but to give in, at least somewhat to what his body was telling it. It was true; he was clearly enjoying what was happening, letting out a long deep sigh in pleasure.

All he could think was how could this be happening to him, how could this little nerd be doing this to him. He knew he had to get himself under control and stop this now.