The Telemachus Story Archive
Angelo and the Brotherhood of Adam and Abel
Chapter 7 - The Care of The Community
By Ferdy (Illustrated by Franco)
Email: nandferdy15@gmail.com

As the echoes of grating stone subsided, Angelo strained his hearing to catch the slightest sound or indication that he was not alone. Apart from the distant crackling of the fire and the hissing sputter of the torches there was only one other sound. Dimly as if heard through the walls from a great distance, he heard a deep tolling of a distant bell. This too subsided and the chamber returned to relative silence. Stretched out, naked, his bound cock and balls were quivering in anticipation. As time dragged on he felt his manhood droop and rise as a degree of boredom set in to be replaced not long after by arousal as erotic imagination fed blood to his cock. He imagined unseen hands touching his bound and vulnerable flesh and this thought alone time and again made his cock jump in anticipation.

He was jarred from his reverie by the grating squeal of a bolt being drawn back; the chamber amplifying all sounds and confusing them with echoes. It sounded like the door at the far corner had been unlocked and several pairs of feet, all bare judging by the sound, were approaching his blindfolded and captive form. He refrained from calling out. His experiences in this place had taught him that speech was a form of communication that was not approved of; instead he waited to find out what his next lesson would entail. As the sounds of steps increased in number Angelo began to wonder just how many pairs of eyes were gazing upon his naked body and to his shame and confused delight he found himself becoming aroused once more.

The chamber descended into silence, all shuffling stopped. From the farthest end of the long room, Angelo heard the dragging of cloth against stone as somebody in a flowing robe approached. The stillness was shattered by the groaning scrape of wood across stone as something heavy was dragged to stand a few metres ahead of the bound man. Angelo guessed a chair had been placed somewhere in front of him. There was a rustle of fabric as somebody sat and settled themselves. Silence... then, it began.

It started slowly, gently; hands stroking down his back, up his thighs, the backs of his legs, his chest, pecs, abs, arms and buttocks were caressed and stroked, gently scratched. He could feel he was surrounded and lost count of how many different touches were applied to his flesh, but in all this, his genitalia were ignored left untouched as the rest of his body, head, ears, jaw, neck hands and feet were touched and explored; occasionally a sharp pinch or heavier scratch but never anything excessive.

It was, however, relentless. The cascade of feeling was almost overwhelming, smothering rather than erotic, but then it changed. The hands stopped and mouths and tongues were brought to bear. From top to toe his body was kissed, nibbled, licked, he felt his perspiration lapped up as every nook and cranny was explored, when a muscular tongue wormed its way into his butt he had to stifle the groan as at the same moment both his nipples were licked and sucked at. Just as he thought he might explode, the sensations ceased, there was a familiar ‘thunk’ and the frame was tipped gently backwards until he felt it locked off with him at an angle of about fifty degrees.

There was silence apart from a little shuffling and once again, hands and tongues were laid to work against his tingling skin. He felt a mouth trailing a series of licks and kisses up across his thigh onto his quivering abdomen. Two tongues lapped from the pits of his outstretched arms around onto his chest and his aureoles were circled and his nipples were licked across, sending electric shocks down his body and finally, at last, at last! A hand gently enclosed his balls, gently kneading them and his vibrating cock was expertly caressed and stroked by a cool firm hand. Angelo felt the figure performing this action, stoop between his legs and with delicious vibrations shaking through his thighs he felt the flesh behind his balls being licked and slicked with saliva. A lubricated finger slid into his anus and he shivered in anticipation as he gripped hard against the intrusion in a series of pulses, increasing the stimulation. Suddenly he felt first one and then both of his balls being sucked into the mouth the tongue working against them. Saliva slicked around them and with his cock being gently jacked and his prostate being stroked he could feel the precum bubbling up his shaft. As the juices emerged from his tip the mouth moved with a sucking sensation off his balls and the slick moist tongue lapped up the underside of his erection and the droplets were collected.

When the sensitive crown of his dick was sucked into this willing mouth, Angelo almost cried out at the sweetness of the sensation as he felt himself being expertly blown by a cool mouth as the base of his cock was gently jacked and the probing fingers continued to massage his prostate. Angelo knew he must come now, but suddenly the mouth and fingers were removed and with a tight squeeze to his balls and the base of his cock; the pleasure stopped and he was left gasping with pain and unspent desire. 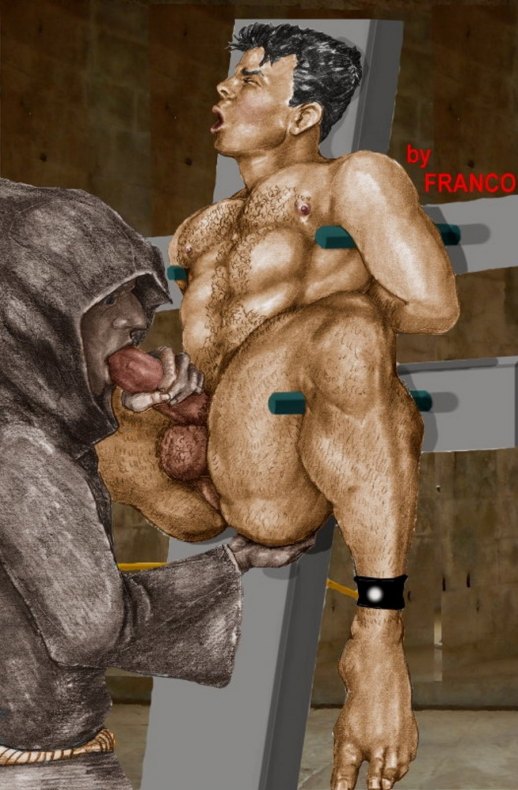 The blindfold was whipped from his eyes and after a moment of blinking as his eyes adjusted to the light, he looked up at the cowled shape still holding his cock and balls. It was the tall gaunt figure of the ‘Emperor’ as Angelo thought of him. As he watched, another robed man to one side slid down the tall man’s hood to reveal a long narrow face with a hawk like nose and piercing bright green eyes. The almost bald head had a fuzz of short steel grey hair and the hollow cheeks held deep lines that may have been from excessive laughter or frowning. The neutral expression it currently held gave no indication of the demeanour or intentions of the man before him. Angelo estimated him to be somewhere over sixty, by how much he couldn’t tell.

Angelo now looked about and saw that there were at least a dozen or more figures standing around him. Most had full habits like the man still caressing his genitalia, though one or two wore the slit sided robes he had seen worn by ‘Violet-eyes’ and his companion on his previous visit. As if on a signal, all of the figures removed their hoods and Angelo saw a mixture of men of varying ages and ethnicities. A few appeared to be his age or thereabouts, but most were older, in their forties, fifties and over. All were gazing at him with varying degrees of lust or interest. He realised with a mixture of shock, revulsion and excitement; that these hands and mouths had touched, tasted and savoured his bare skin and all were clearly ready and anticipating more. With a moment of panic he looked for a familiar face and saw the only face he knew, standing to one side of the large high backed chair that had been placed before him. The violet eyes were downcast and Angelo sensed a reluctance to be present in the looks that the bearded monk was casting in the direction of his superior. This searching glance had not gone unnoticed by the figure before him, who had observed the direction of Angelo’s gaze and an eerie smile appeared on the sallow face. Angelo shivered.

The brother superior/Abbot, or whatever he was, continued to gently caress and stroke Angelo’s manhood and despite any thoughts of shame or resistance, Angelo could feel his arousal as his dick, expertly stroked and teased, stiffened ready for action. This was added to as the two nearest monks to either side of his bound form, both of whom were clearly already in a state of advanced decrepitude, began to lick and stroke his chest and defenceless nipples once more.

The sombre figure before him smiled a broad smile though it did not reach as far as the eyes, as he gestured out with one hand and an assistant handed him an object which Angelo had puzzled at from those on the trestle. He had dismissed it as some sort of primitive phallic sculpture. It was shaped roughly like the bishop from a traditional chess set. A bluntly pointed egg-shape at the head which sat atop a sphere of similar girth which in turn sat on an ovoid base from which sprang what Angelo had assumed was a phallus; a curved protrusion that sprang out and up from the base curving back towards the main body with a larger rounded head; the whole formed of some dull black substance.

The rise of arousal was intense. He felt again the rush in his penis and the pulsing briefly stopped as the gaunt figure bent to sup the clear juices from Angelo’s weeping dick. Angelo recognised the build up in his body and part of his mind was howling for release, for orgasm, but each time he felt it must happen, as if on cue all teasing stopped. Frustratingly, each time, at the point before his imagination could carry him over the point of no return.