The Telemachus Story Archive
Angelo and the Brotherhood of Adam and Abel
Chapter 1 - The Enclosure
By Ferdy (Illustrated by Franco)
Email: nandferdy15@gmail.com

Inspired by the Drawings and Artworks of Franco 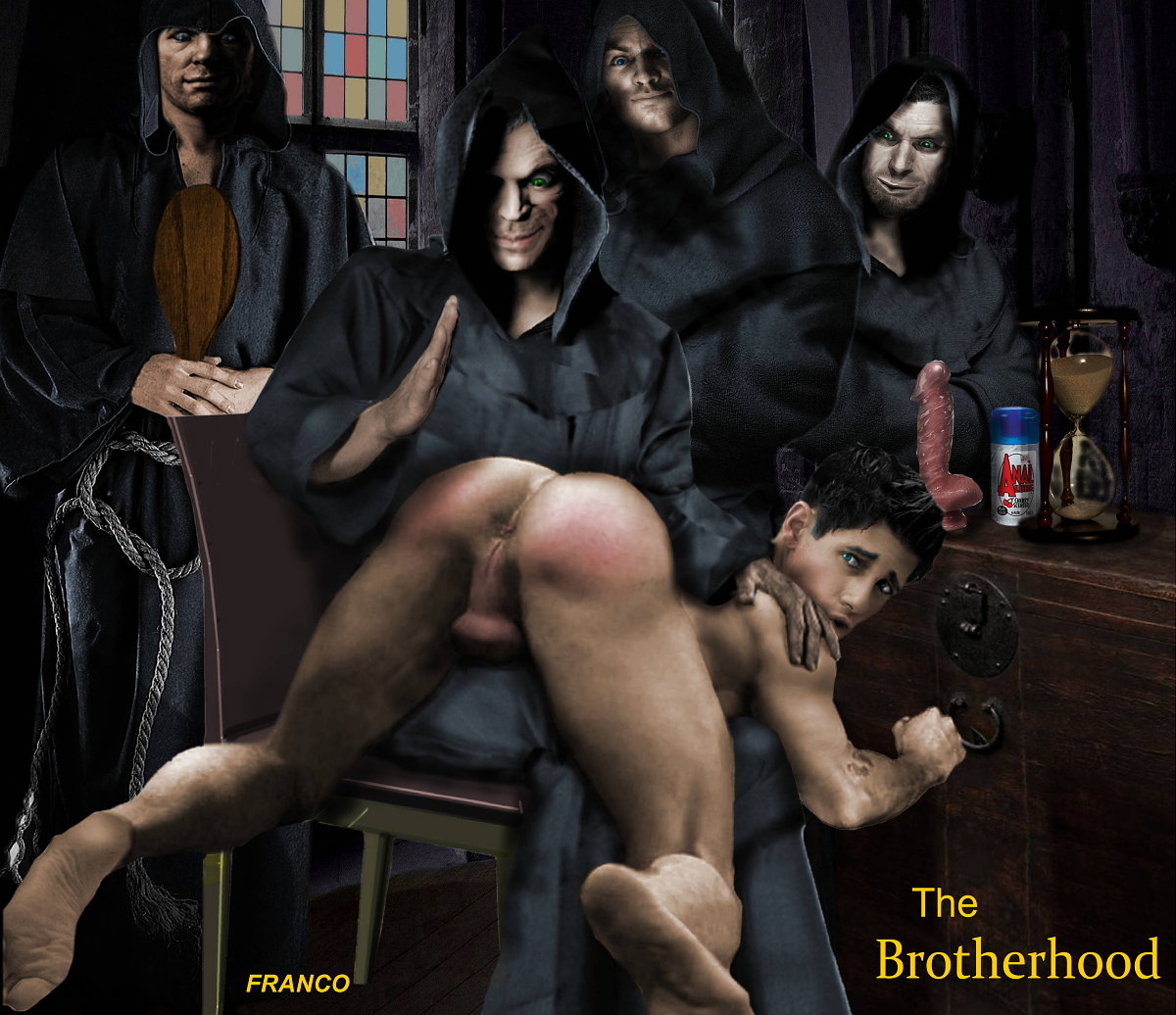 He had always been drawn to the garden, the high walls a tantalising barrier that hinted at secrets within, and he made his way out to it on foot the first opportunity he was able to make time, after his return to the island.

Angelo had been travelling when the news had come via a cousin that his father had passed on. He curtailed a trip across Turkey and came home. Not that he really thought of it as home; apart from one visit his first Christmas after leaving to study on the mainland, he had never been back; his only communication the occasional card or email pic’ sent from his mobile to show a mountain view or beach he thought particularly beautiful.

After his mother’s death when he was fifteen, he and his father had slowly grown apart; one, withdrawing inside himself, the other burning for adventure and the world beyond the Island. Despite his attachment to ‘his garden’ as he liked to think of it, young Angelo had left to study agriculture and engineering at a college on the mainland. Since graduating he had travelled widely, paying his way as a labourer/ gardener/Jack of all trades, picking up work where and when he could, ticking off countries in his passport, hungry for experience. Now he was twenty seven and had returned to see his father laid to rest and to live in the empty family-home until he had sorted out his deceased parent’s affairs.

Ever since he had discovered the high walls of the secluded garden as a youngster taking a dare from one of his buddies, Angelo had felt there was something special about this place that he did not want to share. So all those years ago, when he had returned to the gap in the perimeter fence of the estate, where his friends waited, he’d said he’d only gone as far as the woodland surrounding the eerie empty property, but had seen something moving and come away. The others had shuddered in ghoulish horror and they all jumped on their bicycles and powered away across the fields to the dunes and the beach beyond. As kids the rumours running about the island told of ghosts and were-beasts lurking on the abandoned property and of strange lights seen at night that served as a deterrent to all but the most determined visitors. Looking back from the top of the dunes leading down to the beach you could just make out the turrets and ornate chimneys of the crumbling pile, peeking above the top of the dense woodland that protected it from public scrutiny.

Revisiting it now after an absence of almost ten years, it had lost none of its mystery and allure. Angelo peered cautiously over the wall, made wary by rumours that the old property was now occupied. A fact he slightly resented as he had come to consider the estate, or at least the garden as his private domain. Two years before his return, an obscure religious order had bought the old place and had moved in. They were rarely seen and seemed to keep to the main house, barely venturing out to the perimeters of the estate; except apparently to cut back any obvious overgrowth in the outer meadows, Angelo observed, as he retraced his old route through the bushes and across the meadow and woodland to his hidden Kingdom.

On that first visit of discovery as a twelve year old, Angelo had in fact gone a great deal further than the edge of the woodland and that was when he had stumbled upon the walled garden, separated from the main building but connected to what appeared to be outhouses or an old stable block. The warm yellowing stone of the wall was covered with trails of Ivy and creepers and contained a space about the size of three tennis courts. At one point a sycamore had rooted itself in the earth at the foot of the wall and as it grew had disrupted the foundations causing the wall to bulge out and some of the gabled capstones had fallen away making access possible by climbing up the tree. On that occasion he’d been unable to see any other way of gaining access to the garden which was as abandoned and as eerily quiet as the rest of the plantation surrounding the ageing mansion.

He had plucked up the courage to return on his own, and that was when he had explored the wild walled space thoroughly and slowly fell in love with it. It felt like it was his private kingdom and nobody else even knew it existed. Always something of a loner, he returned to it more and more often as he grew older. By the time he was sixteen, when all his college friends where discovering girls, Angelo was discovering he had a knack for growing things, a habit he had started in the garden; ‘his garden’. There he learned by trial and error the art of cultivating tomatoes, and the softer fruits of summer, raspberries and strawberries, all which thrived in the still, warm air afforded by the high walls, which themselves exuded heat as the summer days progressed.

For most of the others the idea of the four mile cycle out to the dunes was no longer of any interest, so he frequently found he had the beach and the dunes to himself too. There was the hulk of an old fishing boat that had been swept ashore years ago. The weathered timbers, listing out of the sand, contained a mini lagoon once the tide receded. The sixty foot length of the hull provided a vibrant rock-pool bath several feet deep, refreshed at high tide that warmed in the sun; amongst the weed strewn timbers, small crabs and shrimps scuttled as he moved gently through the water. It became his habit after swimming in the chill waters of the sea, buffeting through the breakers, to follow it with a warm bath in the old hull, to take off the chill. Then he would saunter back to the seclusion of the hidden garden.

It became a routine; he would cycle out to the break in the fence, lock and hide his bike in the dense shrubbery, then having wound through the tunnel-way in the bushes that he had pretty much created over the years, a widening of an already existing animal track; he would jog across the meadow of tall summer grasses and weeds. Then into the woodland and finally come to the wall. He still climbed over using the tree even though he had subsequently found the doorway, massively overgrown and blocked with brambles and Ivy, so much so that from the outside there appeared to be no access at all.

The wall ran around three sides of the garden, the fourth wall was created by outhouses and what appeared to be an old stable. Made of the same butter coloured sandstone as the garden wall; these were tightly shuttered and the high arched windows were way off the ground and boarded up. The only doorway was also arched, and decorated with what had once been ornate carvings worn to indecipherability by the passage of time, but blocked with a solid oak door strapped, studded and hinged with ageing blackened steel. There was a knocker and the keyhole for an enormous key. When he’d first found it he’d knocked loudly and the sound had echoed dimly from the other side of the door implying a large space, but all attempts to see into the abandoned structure were foiled by the shutters. He’d tried looking through the keyhole but had detected nothing but darkness and a faint damp musty smell of abandonment issuing from within.

Once in the garden his summer days, and ‘study days’ when he could sneak out pretending to be visiting the library, would follow the same pattern. An hour or two tending to his crops and plantings, then in a corner where the wall met up with the outbuilding and the sun shone down uninterrupted for almost the entire day, he’d set up a base camp with a space to stretch out, where he could sunbathe naked and read or do homework. Once the weather became really warm he would strip as soon as he arrived and tended to his plants, a solitary Adam in his private Eden.

Then he would slip on his short’s, scale the wall, run through the woodland enjoying the feel of the air rushing over his skin; across the meadow, the tall grasses brushing his torso. Through the shrubs and the gap in the fence then the run up the back of the dunes, his footsteps moving from an easy lope to a wider jumping gait as the silken sand slipped from beneath his customarily bare, hardened feet and he fell forward onto his chest amongst the coarse spikes of Marram grass to peer over the top of the dune, checking if the beach was deserted, then a mad slide down the dune and the fifty or so meters to the old hull and the last twenty metres to the line of foaming surf. A half hour swim invigorated by the tumble of the sea, to emerge dripping and chilled for his ‘bath’ in the hull then back to his private idyll in the garden. At some point he couldn’t remember when, he’d dared himself to slip off his shorts and bathe nude in the old hull. His shorts hung on a protruding nail. From thence he would run the return journey naked, always stopping to check the coast was clear as he reached the top of the dunes; then through the fence to the relative safety of the old estate and his garden. And so the long lazy summers of his youth had passed. Then at seventeen he had left the Island, almost never to return... until now.