At a beach surrounding the Great Lakes, the Planeteer's are battling a flood of toxic waste coming from a place unknown?

Thousands of fish are dead and drifting to shore different colors of waste wash to shore along with the fish!

Despite all their efforts the Planeteer's are not making any headway and decide to call upon Captain Planet!

With fists and rings raised above their heads they call upon the handsome and very good and happy to help at all times the muscle bond Super Hero! For help with this disaster!

Earth, Wind, Water, Fire, Heart are called out and Captain Planet sparkling with power comes forth!

"Oh hi there Planeteer’s what a mess this is, I think earth wind water and fire is needed to clean this up!"

Captain Planet with both his fists forward causes a giant circle of earth around all of the toxic waste!

Then a water and wind shield to hold it together he then makes a giant circle of fire above it all and with the wind makes a cyclone which pulls all the toxic waste up and towards the circle of fire.

All of the toxic waste goes into the fire and is destroyed little by little.

The Planeteer's hear a call for help from a boat that has went ashore and race to it!

Captain Planet has driven all the toxic waste into the fire when he hears a weak help from a cave area down south.

He flies in that direction fast the sound is coming from a cave he flies inside.

It is dark so Captain Planet puts fireballs to each of his hands and flies on to the sound of the cries for help getting louder!

And soon Captain Planet can see a young handsome muscle bound man penned underneath what looks to be an old ship sail mass.

He looks to be a half a foot taller then Captain Planet and he is completely naked with a very long penis and huge testicles.

"I'm here to help you let me move this old ship mass off your midsection then we will go from there!"

"Thank you so much I thought I was going to die in here!"

Captain Planet moves the old ship mass off the young man and to the side of the cave area.

Captain Planet can see why the young man came in here there is a pool not far from him with waves of steam rising upwards.

"My abdominal muscles hurt could you pick me up and put me in that pool of water? It's fed by a very warm spring might make me feel better."

"Sure I can do that what's your name?"

Captain Planet puts his strong arms around Rain's very muscular shoulders and the bends of his well developed legs and lifts him up.

Rain groans loud and turns his head in the opposite direction away from Captain Planet.

Captain Planet goes to him and puts his hand to his head.

"Please hold me I feel like I'm going to faint!"

Captain Planet puts his muscular arms around Rain and holds on to him  sitting back besides Rain.

Rain starts talking to Captain Planet but something is very wrong! The  words are echoing and Captain Planet’s eyes are glazing over becoming  hazy and out of focus!

"That was to easy Captain Planet you fell right into my trap welcome to my place the cave entrance now looks like a complete rock wall."

AcidRain Man puts his hands above Captain Planet's head and blasts of light yellow and green rain start flooding down on Captain Planet. 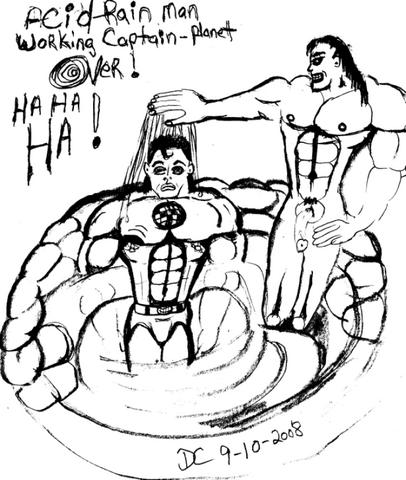 "I have been watching you for sometime now Captain Planet I was there but you didn't know it you could be a problem to me and I want you sexually and to reprogram your mind to my will."

"Oh when I'm finished with you Captain Planet you will come to me and you will obey!"

AcidRain Man floats up out of the pool his huge penis is fully erect a good 14-inches and fat his huge balls hanging down the size of tennis balls.

He grabs Captain Planet by the hair and pulls him out of the pool he then pulls down Captain Planets briefs exposing Cap's limp penis and testicles and pinched muscular buttocks!

Acid-Rain Man bends a weak Cap over and spreads his muscular legs wide with his feet.

AcidRain Man's penis head self lubes with a yellow and green substance he puts it right to Captain Planet's asshole and starts forcing it into him!

Finally Acid-Rain Man's penis head goes into Captain Planet this drains more of Cap's power and he goes completely limp his muscular arms and legs like a rag dolls!

Cap's eyes are bulging and very drugged looking as Acid-Rain Man has him impaled and starts walking him further into his cave.

"Oh yes your good and weak Captain Planet don't worry I can re-charge you some I know what gives you your great powers."

Acid-Rain Man from his fingers comes a red colored like gas he points his fingers towards Cap's nose!

Captain Planet breath's the gas in exhales and breath's it into himself!

"Oh yeah Captain Planet breath my sexual perversion gas into your body it will over ride your Heart power and make your limp penis grow to rock hard!"

And indeed Captain Planet's limp penis starts to grow rock hard and to it's full 8.5-inches!

Acid-Rain Man comes to a room in the cave that looks like a laboratory.

He walks himself and the impaled Captain Planet to a drawer and reaches inside and pulls out a condom.

He opens it and takes out the condom and slides it over Captain Planet's erect penis!

Captain Planet is in a weaken state of mind he has been captured and is being totally dominated by a very handsome muscle bound huge penis male that plans to reprogram is mind to his will!

it's not completely black yet good your going to need what power you have left!"

"No it's not gone Captain Planet in your weaken state your not able to fight the effects of my sexual perversion gas it's just over rode it! HA-HA-HA!"

but I'm older then you would think I've been around since the turn of the century."

"With your sperm Captain Planet I will be able to completely control you not all of the time but when I desire your company you will come to me and you will obey!"

Acid-Rain Man begins flooding Captain Planet with his sexual perversion gas again Cap tries to hold his breath but can't he's to weak and breathes in the gas and exhales!

Acid-Rain Man watches the gas going into Captain Planet knowing that it is over riding his Heart power and making his penis throb and pulsate!

Acid-Rain Man starts pumping Captain Planet and walks him over to a full-length mirror.

Cap looks at himself impaled on this handsome villain's huge cock and looks at his throbbing penis he keeps breathing in the gas and it's taking over his mind!

"Oh yes Captain Planet your so handsome look at your throbbing penis you want to ejaculate you want to climax and shoot your load!"

Captain Planet not stuttering anymore for the moment.

Acid-Rain Man starts working Captain Planet's rock hard cock he reaches into the drawer and picks up a tube of lubricant and slicks down Cap's rock hard incased cock!

Four cameras in the room are taping everything from all angles.

Acid-Rain Man stop the flood of gas he knows it has Captain Planet totally in its power.

He starts pumping him faster and faster and jacking his pre-cum- dripping penis!

Captain Planet shoots huge loads of his sperm into the condom for a good minute load after load then slows and stops.

Captain Planet's climax had a strange effect on him his handsome head starts jerking up then down continuously!

His eyes glazed over un-blinking his eyelids half way down his pecs indent at his hard nipples making big circles then relaxing then indenting again!

"Oh yes that got you good Captain Planet your power level good and zapped now it's time for me to shoot my load deep into you!"

Acid-Rain Man starts slamming Captain Planet faster and faster Cap's muscular arms and legs swaying back and forth with each thrust!

"Oh yes that felt so good Captain Planet can you feel the effect of my sperm it's a powerful mind control chemical that will last a month and even when your fully re-powered!"

"Yes you do need more power Captain Planet your chest globe is completely black I'm going to re-power you and you will obey me do you understand?"

"Yes I will obey you Master!"

Acid-Rain Man takes Captain Planet to a tilt table and straps him onto it once this is done he pushes a button and from up above a wide sunbeam goes directly to Captain Planet's chest globe.

Captain planet starts getting stronger his chest globe starts glowing and getting brighter!

Acid-Rain man removes the condom from Cap's penis and puts it in a refrigeration unit.

"There now just two more loads of your sperm Captain Planet and two more of mine deposited into you and your brain will obey me and you will be my sex toy forever!"

"Captain Planet bend over and spread your ass-crack for me!"

Captain Planet spreads his muscular legs wide and bends over and with his fingers spreads his ass-crack exposing his asshole!

Acid-Rain Man's penis head self lubes again and he sticks the head of it to Cap's asshole and inserts it fast!

"Oh yeah I know it's making you weak Captain Planet but your so strong and you can take it you will obey!"

"Oh yes Captain Planet all your power is drained your chest globe is black as tar!"

Acid-Rain Man smiles an evil grin and takes Cap back to the tilt table and strap him onto to it and pushes the button again a wide beam of sunlight beams down onto Captain Planet's chest globe.

Planet's sperm and mixes it with some type of chemical.

He un-straps Captain Planet from the tilt table and hands Cap the tube and tells him to drink it down.

Captain Planet drinks down his own sperm and the chemical and hands the tube back to Acid-Rain Man.

I'm going to put a small audio devise inside your left ear no one will be able to see it do you understand?"

"Yes Master when you call I will come to you!"

Acid-Rain Man puts the devise inside of Captain Planet's left ear it is not noticeable.

Acid-Rain Man tells Captain Planet his orders and whenever the Acid-Rain issue comes up he will ignore it and change the subject!

Then Acid-Rain Man reaches inside of Captain Planet's briefs and his long middle finger lubed with a short sleep drug inserts into his asshole!

Captain Planet falls to sleep quickly! Acid-Rain Man opens the cave entrance and sets a sleeping Cap down where the sun is beaming down on him.

Captain Planet wakes up and flies to the Planeteer's.

Captain Planet has just cleaned up a toxic waste spill he is hovering up in the air when from inside his head he hears.

"Come to me Captain Planet!"

Captain Planet tells the Planeteer's he has to go check something out and will be back when he can!

They all smile and say hurry back to us Cap!