The football event was a disaster. Brody played the worse game of his life. He seemed preoccupied and unable to focus. His movements seemed stiff as if he pulled some muscles below his waist. Of course most of that fact was probably due to Dr. Doom who used his nano remote to send critical jolts to the young hunk’s prostate at critical moments of play. By halftime Brody’s overly stimulated junk was pressing so hard into his athletic cup that he had to run to the locker rooms so he could aggressively screw himself with a “medical dildo” that Doom had furnished him while also masturbating himself until he was drained. By the end of the championship game, thanks to Brody’s continual misplays, their hated rivals had won by over fifty points. It was an utter route and everyone blamed Brody. Then, as if his reputation could not sink any lower, a video appeared of Brody getting butt fucked by their hated rival’s football team while begging for more of it. Worse, it showed Brody moaning out to them the plays his school would be using in the big game. Not only had the campus stud willingly given up his arse to their rivals, he had given up their hopes of winning by betraying them. He instantly went from hero to zero on campus!

It was after that video’s appearance that Brody’s enraged teammate grabbed him.

“You cunt,” one screamed as they gagged him and tied him spread-eagled across a weight bench. “We are going to fuck you over for what you did but first,” he viciously laughed as he signaled another teammate who produced an electric shaver. “We are going to un-mane ya, you cocksucker.”

“ Mmmpphh,” a squirming Brody protested through his gag. Half-way through his muffled objections however Moose, the team’s biggest but dumbest slab of beef decided he wanted to pop the quarterback right then and not wait for any sheering.

“I want his arse now,” he muttered as he spread a now wailing Brody’s powerful legs apart and rammed his thick slab of dick into the football hunk’s quivering arse-hole.

“EEEOOOWWWW, Brody yelled through his gag as Moose drove his cock deeper into the former’s guts. From a hidden alcove Dr. Doom watched the action. He had been tipped off about the “plans” by the coach. When he saw Moose slam into Brody, he quickly activated the nano bug affixed onto the hapless quarterback’s prostate. Immediately that familiar itch hit Brody’s insides. Happily, Moose’s dick was scratching in all the right places. As Moose plowed into him Brody’s cock and balls began to tingle with pleasure and he began to squirm with pleasure.

“Bitch,” Moose sneered as he grabbed Brody’s nuts and pulled on them. “I know you get off on ball pain too,” he whispered to Brody as he rolled the hefty low hangers on his massive hand. “So here is a bit of it,” he grunted as he squeezed them. Brody gave a low moan and nodded his agreement to Moose.

Brody felt his hair being grabbed by a teammate. Losing his hair was a critical blow to his ego. It was the masculine symbol of his self-image as the envied “lion” of the campus. His teammates knew this fact too, which made shearing him of his trademark curly locks just as critical for their revenge. Brody wanted to fight but Moose was still hitting that sweet spot on his prostate and working Brody’s nuts. “MMMMM,” he repeatedly whimpered in sexual heat as he found himself getting erect. Someone removed his gag and he heard himself gasping in pleasure.

“You like it huh you faggot,” Moose laughed as the buzzing shaver began moving along Brody’s scalp. The nano went into overdrive right then.

“Shut up and just fuck me you dumb slab of beef,” Brody yelled out without thinking as the itching flared up within him. “Fuck me harder and deeper you stupid fucking son-of-a-bitch,” he wailed as his need to satisfy that itch intensified. “Ah shit Moose just do me man. I fucking did your girlfriend last week so do me bad,” he shouted hoping to inspire his ravisher into slamming into him hard enough to satiate that need for relief inside his guts. He was so fixated on getting that sensation that he didn’t even feel the cool air that hit his rapidly shorn head.

Moose snorted in rage and, raped him with renewed vigor as Brody sobbed out for more.

“Yeah the bitch loves it,” someone laughed as Brody began to raze his butt upward to let Moose get deeper into his chute. As he did so, his own erection was clearly visible.

“The pussy has a boner,” the team kicker laughed. “Go on fuck while we finishing shaving the lion,” he gleefully encouraged.

Brody suddenly visualized his golden locks being removed and a part of his ego cracked. Even as he humped back onto Moose’s cock he felt hot tears come to his eyes. That night a sobbing, but, thanks to the nano device, a totally sexually aroused, Brody got his head shorn of his symbolic golden curls, his balls abused, and his butt savagely fucked by every teammate. To his further humiliation he repeatedly begged for them to screw him and shot his wad during every new butt-fuck. When they’d finished he was panting in exhaustion, his crotch rubbing on the sticky cum bench surface upon which he had ejaculated, and his face dripping with the jism cream pies that a few had performed upon his handsome features. Dr. Doom turned off the nano and slipped away. Hours later the team left their fucked-over quarterback in the lockers, while giving each other victorious high-fives. Brody’s head hung in shame over the edge of the workbench glancing down at the pile of golden curls that lay in a heap before his red teary eyes. His self-image as a macho stud was totally shattered. After awhile he got off the bench, grabbed a pair of jeans and black tee shirt someone had left for him. He put them on and stared at his image in the mirror. The face that looked back at him looked the same except this time there was no blonde curls framing his face. Still he felt as if the team had mentally castrated him. 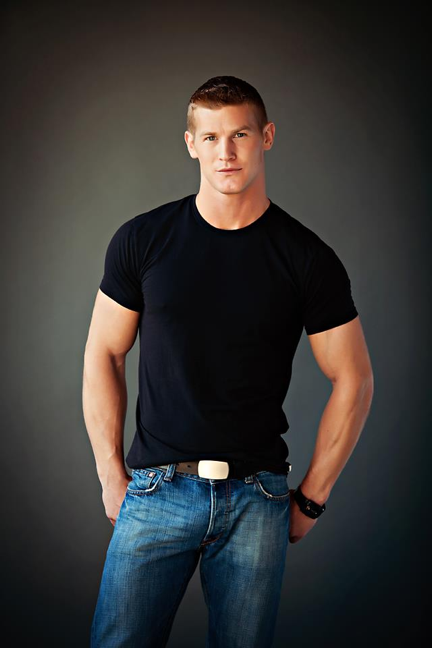 The “buzz look” he had caused campus comments, which soon turned into riotous mockery when word of the incident in the locker room got around. Woman laughed in his face and, on the few occasions, he got a girl into bed, he quickly discovered his sexual experiences with men had left him completely impotent with women.

In the end he went to the coach of his former team to beg him to fuck him. “Please I need a cock up my arse so bad to stop this itch in me and, with my skanky reputation, all the guys are turning me down.” Taking a delighted pity on the former macho stud, the coach permitted Brody to become a personal fuck-toy while also making sure, by daily use of a razor on Brody’s scalp, that the once “golden lion” always remanded a “bald eagle”.

As for Barry, he went onto an illustrious career in the National football League. One day Dr. Doom came calling with a certain DVD of a much younger Barry sodomizing some unknown blonde hunk. Blackmailed into undergoing an “exam”, Barry continued his public performance as a star NFL quarterback but in private gatherings he always took the “tight end” position.