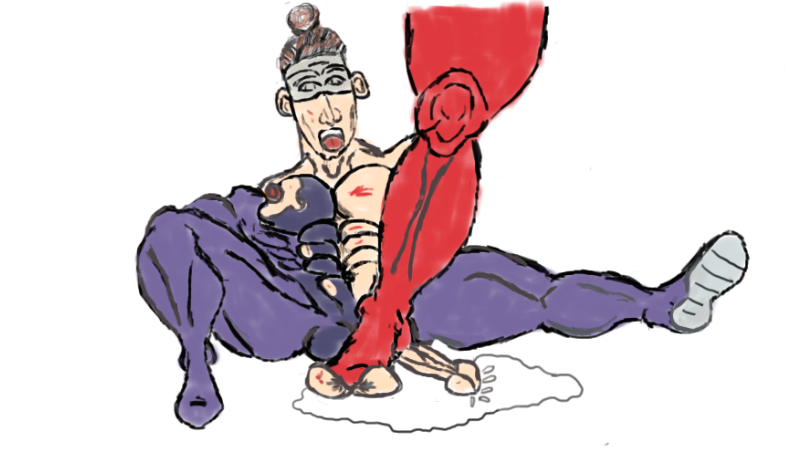 Tony, sat on the roof of One World Grand Island Tower. It was the tallest building in Grand Island City. He looked around to make sure there was no trouble. On one of the floor's his nemesis Doc, a chunky bear that tried to take down superheros by engineering villains was below. Tony just celebrated his 22nd birthday. He was known as The Intern, a sidekick to his mentors Slate, Razor and Brick. Together they defended the metropolitan area of Grand Island City. It was dense with gleaming skyscrapers and sat on the east coast of America. It was a huge city with many villains that caused ruckus and mayhem. Now that The Intern was grown he did his own missions sometimes. The rest of the team trusted him now. He won every fight recently, broke up mob rings, mutant villains and evil doers. Tony was no taller than 5'7. He was a little guy but he was cut and packed on new muscle. He was swift with little body fat. He decided to drop the name The Intern and went as the new hero Slick. He was swift, agile and the new official member to the team.

The muscle pup sometimes ventured off in his own territory. The young Nick Jonas lookalike dropped down through a dark elevator shaft to find information in Doc's office. The villain wasn't around and he wanted to find out his next plan. Slick's suit color was all black but it gave off a metallic look. His muscles could be seen with every curve. He wore anatomically correct nipples like the rest of his team and high boots that covered his calf. His tight butt was compact, defined and muscular. The suit made a deep canyon in his butt crack. His manhood was reinforced with a light protective codpiece. It was a silver detachable bulge that was a different color from the rest of his suit. His balls and cock pressed against the tight package and caused his dick to coil around in the tight space. From a side view his meat protruded out like a giant ball of meat.

Slick put on night vision goggles as he looked through Doc's files. Slick was a boy genius and could hack systems so he pulled up a master file of recent info. It was there that he found the next mission of Doc. Doc was fusing scorpion matter into a 500 lb former bodybuilder. Slick did more research and found out a lab was below.

He went down the elevator shaft after deactivating one. He glided down 1800 feet in the skyscraper shaft with a harness and landed softly by calculating his rope. He climbed through an air condition duct and made his way into a lab room. There he saw the bodybuilder with an attached metal scorpion tail. The man had his two muscular arms fused with wires. He had claw like hands and dark eyes. I have to help him Slick thought. Slick broke the glass and the water drained out. The man woke up and looked frightened.

"I'm Slick." he said. "I work with Slate and the Arthur Heroes. I'm getting you out of here big guy." Slick tried to lift him but the pup couldn't carry the large man. The guy fell on the floor and began to have convulsions.

"His name is Krusher." a voice called. Doc appeared through a glass door and looked at Slick. Slick tried to break it down to bring him to justice.

"You're hurting people and making experiments," Slick said. "You sicko."

"My, my, my have you grown up," Doc said. He licked his lips as he looked at the handsome Slick in his new suit. Slick's bulge was everything. Too bad you're about to look like a bloody mess in a few seconds."

Just then Slick felt a dagger like needle penetrate his suit. It slowly stung his ass."

"Ahhhhhh." Slick screamed. He turned around and saw Krusher alive and on the attack."

Krusher lunged and tried to capture the hero. Slick dodged but soon began to feel weak. Just then Krusher caught him and began to squeeze the life out of him in a vicious bear hug. Krusher took his stinger and lunged it into Slick's ass. He stung into Slick's prostrate and secreted a venom.

"Welcome to your doom," Krusher said. Krusher dropped Slick and then kicked his abs. His bulge was exposed and ready for an attack. Krusher took his metallic scorpion tail and tried to slam it into Slick's codpiece. Slick moved away. Close call.

"I won't leave until I crush your balls and you beg for mercy little one." Krusher said.

Slick felt the secretion slowly ooze up into his bloodstream. He was a little dazed and sluggish. The perfect vulnerable target.

"Agggggggggghhhhhhhh. The stinger went into his butt cheek. Krusher took the tail to squeeze him and lifted him in the air. With his claw like arms he softly grabbed Slick's package. By now Slick was hard. Krusher envied the young hero. He was attractive, muscular and by what was in his hand very well hung for a little guy. Krusher was jealous of the hero and would make him suffer. Why was he the mutant from Doc's experiment. And Slick could't have it all. Slowly Krusher began to close his fist over the manhood? With his other hand he tugged at Slick's balls. He lifted Slick up and slammed his body over his knee.

"Crack." Slick twisted his body so his ribs would break the slam and not his spine.

He was in utter pain. Next Krusher loosened his grip and tied his tail around Slick's neck. As he predicted Slick tried to use his hands to loosen the neck grip with his hands. His midsection and bulge was exposed. Krusher immediately used his two fists and wailed at Slick's balls. He was relentless and connected every punch deep into Slick's plump ball sack. The sack danced around.

Slick's hard cock was shifted and now looked like a full rod pointed out. Krusher lifted the muscle pup by his pecs and slammed his knee into Slick's bulge. He then took his hand and twisted around Slick's cock.

Slick was in pain. He knew if he didn't do something Krusher would try to break his balls off. Slick did a roundhouse but it only left his cock pointed out. Krusher took his fists and slammed the lad again in the balls. And tried to ram the bottom portion of his cock to cause damage. At this point Slick grabbed his bulge with both hands. Krusher kicked Slick in the face and Slick was knocked down and lay spread eagle. Krusher took his tail and slammed his pointed piece into a cement block and whipped it down at Slick's bulge.

The hero was not used to fighting a villain with this strength. Slick knew his ribs were bruised if not broken and was in pain. His prostate was recovering from the dick hardening serum and his balls had an agonizing ache. If he didn't muster enough energy to fight this villain he may die. Krusher wanted to make the hero scream and lunged at him. He placed Slick in an agonizing bear hug once again. This time he squeezed his lower abs and his injured rib cage. Slick yelled. Krusher's tail turned into a metal rod. The pointer descended into the tail. Krusher inserted his tail in Slick's rectum and began to fuck his tight pink hole. The tail end began to spin inside and touch every fiber and cell in Slick's rectum. Krusher then took his hand and crushed Slick's balls once again. Slick came and was dropped down on his head. Blood dripped from his nose.

Krusher relentlessly attacked and smashed his fists and tail on every part of Slick's body. Slick's suit began to rip and Krusher stung the exposed parts of his body making Slick immobilized. Slick's cock and balls were out. His meaty pecs and his ass exposed. Krusher stood over his prey and was ready for the kill. He put his foot on Slick's cock. And with the other stomped on his abs. He whipped his tail up and made it pointed again. He slowly pressed it against his heart and began to insert the stinger.

Reluctantly Krusher lifted his tail away but bent down and clawed away at Slick's balls. The testicular pummels was enough to cause Slick to almost pass out.

He picked up the hero and threw him in a corner and walked away.

Doc stood over the broken hero and rubbed his cock.

"You're mine tonight," Doc said.

Slick looked up and saw the silhouette of the old man. He wanted to attack him but instead he closed his eyes and passed out. Doc pulled the hero by one foot and pulled him into another room. The torture of the muscle pup, Slick was just beginning.