Big Jeb was born in 1839 on a medium sized plantation somewhere just below the beautiful foothills of the Blue Ridge mountains. Black as coal, he was a slave and the son of slaves...that's just how it was, how it had always been. He grew up tall, with wide shoulders, deep chest, rock hard biceps and thighs as supple and twice as thick as the oak saplings that littered the edges of the tobacco fields. Days were generally spent in the fields, laboring under the overseer's careful eye, sweat slick and always tired but working hard just the same. Jeb's back was fairly smooth because he was an obedient boy, and very strong; able to carry the load of two men by the time he was eighteen. He didn't want any trouble and rarely found it...but sometimes trouble found him. Yeah, Jeb's back was fairly smooth, but if one came up close, maybe caught by the buck's fine features, dusky smooth dark skin over rippling muscle and, following a whim, ordered him off to the side for a casual examination...well, the pale scars of the lash were there to be seen, fingered curiously, wondered at. 'What'd you do, boy, to rile your master?' Jeb would stare at the ground and shake his big head. He didn't want any trouble, no sir! The observer would laugh, run a questing hand over the bucks broad back, maybe test the depth of his chest or even (if the overseer was occupied out of sight) slide it down the sagging front of the buck's canvas trousers. Didn't matter, really, how he got those scars- Jeb was a slave and that's just how it was.

Tommy McCormack knew how Big Jeb got his back decorated because he was the one who came up with the design. His daddy owned the plantation but Tommy was number three out of six whelps and didn't have much to keep him occupied. He wasn't really a bad sort, just full of his nineteen year old self and looking for excitement. He and a couple of friends from farms down the road got a crazy idea one day to build themselves a shed, deep in the woods, all to themselves and drafted Jeb for the heavy work. Jeb wasn't sure if what the young masters had in mind was right or not but what he thought didn't matter, so, loaded up with supplies he hiked the mile or so into the woods with Tommy and his friends. It was hot work, stripped to the waist, clearing the brush with the flies biting so bad and sweat stinging his eyes but maybe not so different than working in the tobacco fields. Tommy and the others sat under a tree, playing cards, sipping some stolen whisky and watching Jeb; joking a little, telling some lies and just generally working themselves up. Jeb didn't really care and paid no attention until Tommy called him over to where the group sat in the shade of the tree. He wished that they would offer him a break but knew it had to be something else. Shuffling up to the group of three half drunk boys, Jeb stood waiting, eyes averted, big blistered hands passively at his side. 'Say, boy, rumor has it that bucks like you are bred with dicks the size of a horse. I reckon there's no fucking way, drop your breeches and give us a look.' Jeb flushed with shame but there was none to notice the hot tide under his black skin as he untied the rope looped around his waist and hiked the canvas trousers down to his ankles. Tommy and his friends hooted their pleasure and spent a good while making sure Jeb's equipment was all there and intact. 'Hey, Tommy, make him squirt!!' That was Eddie Semens, a wild, no good runt if ever there was. 'Right!' Tommy had no objections, 'Start cranking Jeb, let's see how far you can fire that canon...' Jeb looked up, tears in his big brown eyes, and shook his head. 'No sir,' he whispered. Tommy's eyes narrowed to mean little slits. 'What did I just hear you say, boy?' 'No sir,' Jeb repeated, his rich voice strong now, a chocolate baritone, 'it just ain't right...sir.' That's when they strung him up to the big tree and laid his back open. Three lengths of rough, half inch wide hemp in the arms of a pack of half drunk good old boys can do some decent damage. Jeb screamed but that didn't matter, he was a slave and no one could hear him anyway.

Six years later the world seemed to have turned itself upside down. No one would have guessed that the dogs of war would run quite so wild along the quiet swell of Old Virginia. Jeb grew up into a handsome man in his twenties; smoldering anger and outraged honor finally assuaged by a commission in a black regiment of the Union army. He had taken advantage of the chaos and slipped off the plantation one night, face set north. He never looked back...or so he thought. Tommy McCormack joined the boys in gray along with his brothers and somehow lived through Shiloh. He thought he was lucky to be alive until one day, having lost his regiment, he was rousted, alone, from a ruined farmhouse by a Union soldier and taken prisoner. 'Fuck' he thought, 'who taught that black buck to ride a horse???' Jeb, of course, recognized the young master right away. 'Strip your shirt off boy!' Tommy complied, cursing under his breath. He was roped and made to run before the black soldier's horse until his lungs burned and the sweat dripped like hot rain onto the dusty trail. Seemed to go on for hours. Whatever the case, Jeb had a lot of time, as he sat his horse watching the heaving back of the rebel soldier running before him, to consider what he would do to Tommy McCormack when they reached the deserted camp in the shadows of the Blue Ridge mountains. 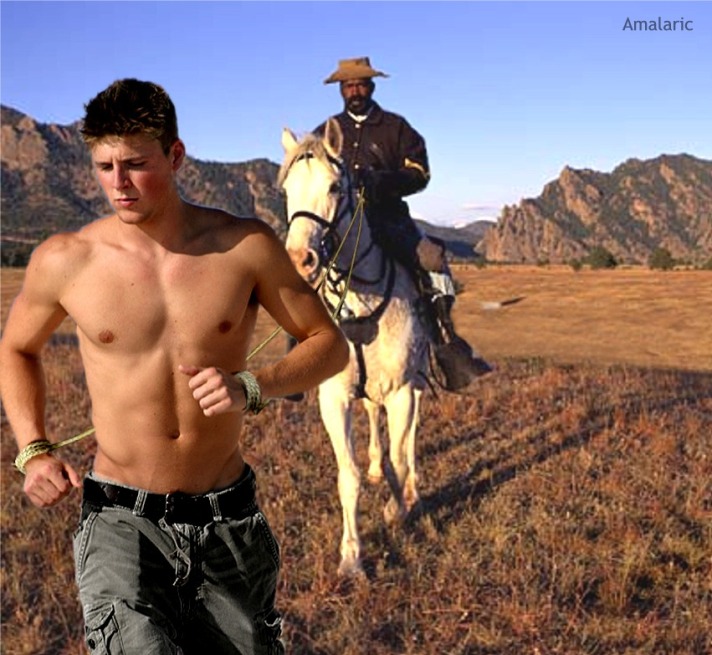