Pygmalion’s heart was broken- no surprise there, since the god had given him the gift in the first place and everyone knew what a sick sense of humor the gods had. He was a purist, hooked on the concept of 3-D. The young artist could have resorted to photo shop and saved a lot of time, but the wonders of cyber-art would have to wait as Pygmalion took the long way around; laboriously carving the woman of his dreams from a block of purest white marble, stroking her ice cold, stony breasts and taut pussy as he pumped his own warm and very much alive cock…until one fateful night when the god brought her to life. Pygmalion pinched himself, wondering if it was a sweet but insubstantial dream, then reached out to touch her breast, suddenly as pink as the dawn…and received a stinging slap across the face for his temerity. She swept off her pedestal, skewering the shocked artist with narrowed eyes the color of tomorrow’s violets, and hissed, ‘Hands off, asshole! I don’t go that way.’ The slamming door as she swept out of his life, leaving nothing but the faint smell of marble dust, sent the sensitive young sculptor’s mind into a spiral of despair. He tried to drown his sorrow with any number of cheap six packs, smoked like a train, eating little more than baked beans on toast…and still the memory rankled. Until one day, in a stoned reverie of bitter reflection, pulling on a semi-flaccid cock blistered with effort, he recalled that he (unlike the snobbish Galatea) went more ways than one.

Pygmalion worked with the feverish intensity of one reborn; the statue emerging from its pristine block as if from some hard and ill-used womb. He lingered, with loving care, over the curve of firm muscle, carving the deep clefts of pecs, abs, and taut inviting ass like a man possessed- and so he was, but not by the capricious quirk of the farking god! ‘I will call him Galateo,’ he sighed, standing back, stunned (with an excusable lack of modesty) by the finished effort. The statue was, indeed, a masterpiece of masculine perfection- the ultimate male standing, in mute incomprehension, stark naked before the hungry eyes of his creator. Pygmalion fingered the cold cock, hours in the making, tracing the polished lines of the flared head, down the delicately veined shaft to the thick root. I need some magic … He had known all along, muttering his lust in half-understood grunts as the chisel cut its skillful grooves…but this time it would be different.

The old witch charged a fortune (well, almost), but Pygmalion didn’t care. He rushed back to the studio, panting his desire, and smeared the lifeless image with the dearly purchased potion. Nothing happened. He waited impatiently, killed half a pack of cigarettes and three beers as his eyes drooped in defiance of a will driven to near madness by the possibilities at hand. What was that? The artist shook his head and blinked. Yes!!! Massive biceps, impossibly tanned, stretched languidly as a baritone voice asked plaintively, ‘Where am I?’ Pygmalion tipped the can of half-drunk beer onto the floor in delighted surprise, licking full lips, as the statue bent at the waist, sucking a breath of stale air into his lungs, and the expansion of the newly-alive stud’s chest was magnificent. ‘You are in my studio because you are my creation. You are…mine…’ The words tripped over a tongue thick with awe from a mind garbled with long-considered possibility. The living statue sighed. ‘I don’t know my name…’ ‘Galateo,’ replied the artist, slowly rising from his chair. Galateo flexed again, somewhat nervously, conscious of his nudity…and something else. He couldn’t move his legs and, glancing down, noticed with tearful eyes that he was only half flesh; living torso all glistening muscle, but below his hot swinging balls, immobilized, fixed helpless to the pedestal. Pygmalion smiled…once burned …the thought fluttered away like a careless butterfly and was gone. He hefted a thick leather whip from its hook on the wall and adjusted trousers suddenly tented by his rapidly expanding cock. ‘Things will be different this time, boy. You ain’t going nowhere.’ 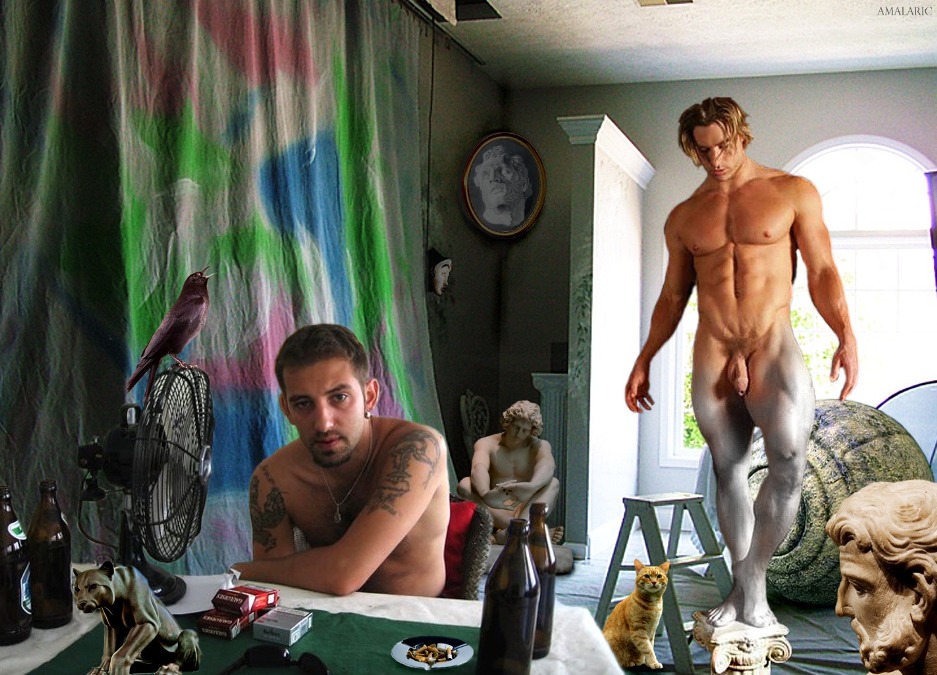