The god of war and also the sun was very hungry; seemed he was always hungry. Stealing a last look at his city Tenochtitlan as he set on the western horizon, Huitzilopochtli felt oddly humbled- like a cosmic dog searching for scraps in the market, but there was nothing to be found. The steps of the great pyramid temples were caked with blood, but it was dry, days old. Frustrated and more than a little angry, he felt his rays dimming, famished for the sweet renewal man-flesh provided. An outsider within the stellar family, Huitzilopochtli was often edgy and wildly unpredictable. He had risen, by sheer force of will, to be the chief god of the Aztecs and, generally, he treated them well; granting them an empire and lighting their southern skies. These people suited him because their temperament matched his own; volatile, harshly bright…ever hungry.

His childhood had been difficult. Conceived under suspicious circumstances; a rogue ball of feathers impregnated his mother, Coatlicue. His scandalized half sister, Coyolxauhqui led a cohort of four hundred siblings, the Huitznauna or star-kin, in an attempt to kill him before he was even born. It was a very foolish gesture with quick and unexpected consequences. Huitzilopochtli sprang, fully armed, from his mother’s womb and slew his sister and many other siblings. ‘Oh my boy,’ his mother cried, ‘what have you done?’ She wept for them all, but especially her lovely daughter. The young god loved his mother and, shrugging his great shoulders, tried to clear the red haze of anger from his mind. He tossed Coyalxauhqui's head into the heavens where it became the moon. He hoped that his mother would find comfort at night by seeing the face of her dead daughter in the sky. Coatlicue sighed; she loved her obstreperous, deeply troubled son and named him ‘Hummingbird of the South’, trying to gentle him, to sway the bloody nature forged by the trauma of his birth.

Like many an outsider, he felt driven to succeed. Rising among his peers, he rapidly outshone them all and, finally, he found his people. The Aztecs understood their god, relishing a nature so similar to their own, and served him well; they named him Mextli and, among themselves, were known as the Mexica , marked by the favor of the mighty sun god who also served as their patron in war. His people were pleased to feed Huitzilopochtli’s ravenous appetite and, in one memorable orgy of blood letting, rolled the palpitating hearts of seventy thousand captives down the steps of his red pyramid temple- oh, how bright was his light on that day! Huitzilopochtli disdained the dainty repast of his half-brothers Quetzalcoatl and Xolotl- limpid vegetarians- preferring, instead, the rich flavor of red meat.

The young conquistador came from the arid planes of Andalusia looking for Cibola. The fabled Seven Cities beckoned like a shimmering mirage and a mirage was all they turned out to be. Oh, there was gold, and some claimed it, extorted from the nervous temples of the feathered, copper skinned barbarians...but it was hard won and Esteban was getting weary and his pockets remained empty. The Aztec king, Monctezuma II, still wrangled with Cortez and the bright city dedicated to the sun stood, yet for a while, in this fateful year of 1519. Esteban was born in the last year of the old century to honest, but poor, peasant stock; a tall, black haired son of Castile with skin the color of ancient ivory. Adventure and the burning desire to provide for the woman he hoped to marry beckoned to the new world and, after months spent on a heaving ship, he set foot on the pristine sand of a strange beach in the uttermost west; all glinting armor, lithe young muscle and Spanish zeal.

Three months later his muscle had hardened, burnished armor long since faded to the color of a dull, rain swept sky, and zeal honed to something approaching desperation.

Lost in a stinking jungle on the fringes of Yucatan, Esteban wandered twisting trails dazzled by a rank world of abundant, but undisciplined, life. His pale skin glistened with a fine sheen of humid sweat as he plodded on in panting silence, hoarse voice long since stilled by the futility of calling out to his vanished cohort. His large, expressive, deep brown eyes held a glint of fear. But the smoldering fire of Spanish manhood, captured a generation later on canvas by El Greco, was also evident; banked like glowing coals within his depthless gaze as the young conquistador moved like a shadow through the green wasteland.

The Aztec, chosen for reconnaissance on this far fringe of the empire, watched his quarry from behind a rustling curtain of wild bougainvillea vine. His lust stirred lazily behind a loincloth woven of shimmering hummingbird feathers and he smiled wryly, glancing at his tented crotch and whispered in sibilant Nahuat, ‘Be still, little brother, the trap is well laid and nearly sprung.’ Esteban, unaware, shuffled a few steps forward, snagged his ankle on what he thought was just another misplaced tendril, and flew into the air with an anguished cry. He watched in a suddenly inverted world as his sword thudded into the jungle loam, dangling upside down bound by an ankle snared with carefully woven rope. A blood red ant the size of his thumbnail skittered across the blade, useless now, just out of reach. The Aztec materialized from green shadow and confidently approached the young soldier. Esteban twisted against his bonds, fists flailing, as the enemy warrior took a seat before him, prodding and then sharply rapping the helpless Spaniard, like a living piñata, with a long rod of pliant tropical wood. When he judged his captive sufficiently exhausted, the Indian captain moved casually forward and stood beside his dangling trophy. Well thrashed, even through the hardened leather of his armored jerkin, panting short breath of mixed fear and bruised ribs, the young soldier hung passive as he was stripped to the waist. The Aztec ran a long fingered hand over Esteban’s supple torso, marveling at the contrast of rich copper skin on white, fascinated and entranced by the soft yet wiry patterns of black hair on the Spaniard’s broad chest and belly. He wished to linger, and did for a while, as the helpless conquistador submitted in perplexed humiliation to the cursory examination but the Aztec also knew a hidden urgency; his god was famished and growing weak.

For three long days they marched along jungle paths suddenly resolved, by the Aztec’s prodding direction, into an ominous kind of rationality. Trails that once led Esteban in endless circles suddenly terminated at a wide clearing dominated by one of the hated pyramid temples. Plodding, finally, under the sky instead of green leaf, the weary Spaniard would have rejoiced, but he was so tired and felt so alone, pricked forward with hairy wrists pinioned behind his naked back, head bowed, luminous brown eyes brimming with nameless pain. He guessed that the pyramid must be their destination; it was the only building in sight and dominated the landscape, but the Aztec called an unexpected halt before an artfully arranged pile of stone that resolved itself before the captive’s swimming vision into a kind of table; all covered with intricate glyphs. The weary soldier halted, responding like a dumb animal to an impatient prod, and waited dimly confused and wondering as the tall Indian rummaged in a large brightly dyed leather bag. Several cakes of nut and dried banana were carefully set aside and the copper skinned barbarian extracted two parcels wrapped in gossamer tissue. One package contained a feathered helmet of brilliant hue and the other a metal breastplate, which he strapped to his hairless chest. The glint of gold refracted the rays of the late afternoon sun but Esteban was no longer interested in that sort of thing. He only wanted to go home and thought, longingly, of a far away woman with hair as black as his own, a wide mouth and narrow hips… He was shaken from his reverie by a rough tug on suddenly unbuckled breaches. The young captive, trembling now with dawning horror, shuffled nervously as trousers were stripped off and he blushed, awkward and terribly vulnerable in his near nakedness, under the appraising stare of the barbarian warrior.

The stone altar was cold under the handsome Spaniard’s smooth back. He had found the strength to struggle at the last; hot blood of pumping rage concocted of youth, fear, the flinty soil of his Andalusian ancestors and, above all, a crystallizing suspicion of what loomed before him- all to no avail. His balled fists were tightly bound and the Aztec easily manhandled the thrashing victim into position splayed against the unyielding stone. He fingered a long blade as the young conquistador turned his head from the alien sky, soulful eyes, resigned now, glistening with tears. Huitzilopochtli, faint with hunger, paused and waited expectantly on the far edge of the western horizon. 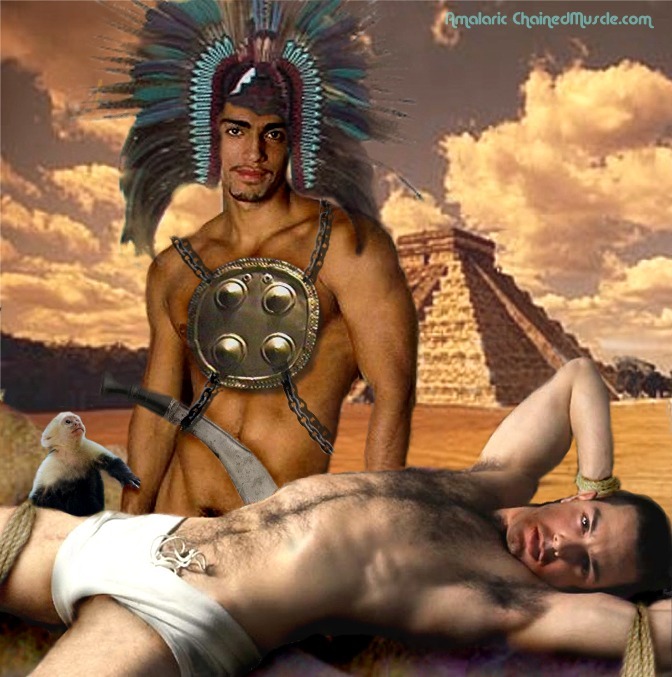