The Telemachus Story Archive
The vengeance of Menelaus
By Amalaric (Illustrated by Amalaric)
Email: Amalaric

THE VENGEANCE OF MENELAUS

Pretty-boy Paris had too much time on his hands. The second son of Priam the Trojan king, Paris was conspicuously lacking in the talents of state craft but not, unfortunately, in money or social connections. Fussed over since childhood, he had always been better looking than his older brother and, in fact, was considered to be one of the most handsome men in the kingdom. This pleased Paris greatly and, he reflected, if he did possess at least one great skill, it was as a mega-stud; Paris was a careful and voracious lover, prodigious and inexhaustible in the arts of sexual sport.

Daydreaming lazily one sultry Spring day in a grove of Ilex trees, the young prince thought sourly of his brother Hektor (so stodgy and disgustingly responsible ), Hektor’s prim wife Andromache and his smart-ass little nephew Astyanax. Well, they could have the constricted life of pomp, circumstance and military prowess and, eventually, the crown of Troy too. Fuck them all. He gazed at his noble reflection in the still water of a stream and winked. He would have his fun… Paris squirmed deliciously while his big prick hardened at the thought of that evening’s pleasures. It was then that he noticed, still gazing at his own reflection, three shimmering goddesses materialize behind him. He licked his full, sensuous lips, sat up and listened to their proposition.

The contest was close but really there was only one possible outcome. Aphrodite walked away with the prize, judged the most beautiful goddess by the world’s most practiced connoisseur of feminine beauty. Paris’ reward for choosing the Aphrodite was another choice and he didn’t have to think about it long; ‘I want Helen of Sparta,’ he said and stretched, cat-like, showing off his muscles. The goddess arched an eyebrow and repressed a giggle. ‘You do realize, my boy, that Helen is already married? Her husband, Menelaus, could snap you like a twig…’ Paris had the temerity to interrupt, ‘He won’t get the chance…the walls of Troy (unlike creamy thighs of pliable flesh) are unbreachable.’ ‘So be it,’ said the goddess, and disappeared.

Ten years later the walls of Troy lay in a smoldering heap of toppled splendor and Paris, with the slightly jaded and very frightened Helen at his side, was running for his life. Hektor and his family died with Troy but Paris, ever the raconteur, made it out and now planned to make a dash for sanctuary south of the border in Egypt. His looks still undimmed, he sighed reflecting on what a great fuck Helen had been those first few months. He glanced sideways at the frightened girl, ‘Hades,’ he thought, ‘she’s still a regular firecracker!’ Indeed, though things were tight right now, when everything was said and done, it had all been worth it.

A month later, camped by the side of the road, the fugitive couple was betrayed by a gaggle of hungry villagers and Paris found himself face to face with his nemesis; frightened at last, he could smell the sizzling anger emanating from big, unsmiling King of Sparta. Helen lay naked and weeping on the rough flagstones of the lonely ruins where the troop had taken the captive couple for leisurely judgment. ‘I am a Prince of Troy, and demand to be treated accordingly,’ Paris had always been a master at bluster. ‘The Princes of Troy are all dead,’ Menelaus replied and young Paris felt the first frisson of real fear. ‘But you,’ continued the Spartan king, ‘are more than a Prince of Troy, oh, much more!’ Paris swallowed his terror and squared his impossibly broad, smooth shoulders. ‘Oh yes,’ Menelaus said, ‘You are the slayer of Achilles, Captain of the Greeks, and also the miserable shit who stole my besotted wife.’ Paris’ exhaled sharply and, finally nonplussed, hung his golden head in desperation. This was going to be bad. ‘For these crimes, death is not sufficient…at least not right away,’ and with that, Menelaus nodded to a subordinate and Paris was summarily stripped naked in sight of the ogling Greek soldiers. The prince put up a vigorous struggle but soon enough found himself strung up beneath the hard, Mediterranean sky. The Greeks whistled in appreciation and Menelaus ran a rough hand over the contours of the Trojan’s hard, muscled body. Paris, a lover of women, was disgusted and feared; first, for the contents of his stomach and, finally, for his sanity as Menelaus’ eyes lit with a strange feral fire and licking his lips said, ‘I have often thought these long ten years of what my wife felt in the arms of another man (he roughly squeezed the Trojan’s supple biceps) or why she would forsake the seed of kings for that of a tin pot prince from the wrong side of the Ionian,’ and, his gaze slowly traveling down the sweat-slick expanse of Paris’ quivering body, lingered on the royal stud’s mighty cock even as his calloused hand groped the scandalized captive’s high, muscular ass. Paris wanted, in that moment to die, but this boon had been explicitly denied. ‘And now,’ Menelaus sighed, ‘I know.’

Helen’s anguished weeping was drowned by Paris’ screams as the long, golden afternoon slipped by seemingly as slow as the ten year war. 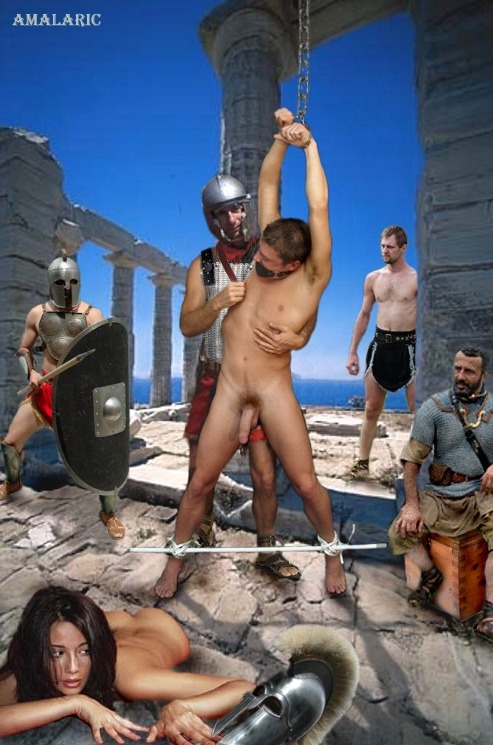