The Telemachus Story Archive
Once There Were Giants
By Amalaric (Illustrated by Amalaric)
Email: Amalaric

ONCE THERE WERE GIANTS

Long ago, a race of giants roamed the earth. Never very numerous, they preferred the craggy mountains, leaving the plains to humankind. Left to themselves the giants were relatively harmless, though it must be said that occasionally a renegade would wander out of the hills, guffawing as he stomped the thatched cottages of the peasantry and even able to tear a castle apart with his bare hands. These types could be hell on the crops and weren't above snacking on the stray herd of cattle or even the odd human caught out in the open. For this reason, though rarely seen, the giants had a rather fearsome reputation.

Down on the plains the macho warriors told stories around their campfires and hearths, and the giants (especially the renegade variety) figured largely in these fantastical stories to the delight or terror of wide eyed children. Their mothers clicked their collective tongues, knowing full well what the tale telling would lead to and, deep in their feminine hearts, worried for the men folk. Sooner or later, in between battles or ploughing the fields, the men of the plains would outfit themselves with burnished armor and sharpened swords and spears and head for the distant purple shadow of the foothills. It was time for hunting giants.

The hunters set out on a sunny Spring day filled with bright songs and excited anticipation. Though tribal lore made giant hunting out to be a glorious sport (and it could certainly be dangerous), the big beasts weren't really that hard to snare. Solitary, lumbering thickly over the rocks and through the sparse forests, they were nevertheless slow witted and easily beguiled and then doped up with kegs of beer (the most direct and least dangerous way of capture) or cornered and pricked into submission with spear and bow.

The merry troop spotted a likely quarry on the fourth day; well over fifteen meters tall, a big muscular buck not more than a couple of decades old. His massive thighs were thicker than the stoutest trees of any forest, breadth of smooth, muscular chest blotting out the sun, big bare feet pounding the ground to booming tremors, biceps of corded muscle- each with more meat than the biggest bull in any man's herd...and, speaking of bulls... 'Gods! Look at the cock and balls on that brute!!!' The thane sighed in amazed appreciation. The troop clamored forward as the giant backed across a stream, blinking wide brown eyes and shaking his huge handsomne head as if dreaming. A few well aimed arrows soon had him backed against the rock face of a cliff...and now came the tricky part. Numerous ropes were quickly cast, knotted and anchored to nearby trees. A frenzied, unbound giant was the hunters' worst nightmare. The confused and angry young buck was more or less immobilized, but still represented a potent threat. Thirty or more kegs of beer, coyly offered by one of the braver warriors in the band, took care of the rest. Soon asleep, the monstrous stud was thoroughly immobilized and the hunters let out a collective whoop of triumph.

The plodding mountain of muscle eventually found himself, always surrounded, prodded and otherwise supervised by the wily hunters, on the unfamiliar flat terrain that he had always thought was merely the stuff of dark legends. Women and children danced with glee as the naked giant was forced to pace about the lord's tiny castle. He would be put to good use- one giant, forced to hard labor, was as good as a hundred ordinary slaves (but far more expensive to feed). In a few years he would be released back into the wild to wander away, shaking his handsome head, rubbing the dust out of wide, perplexed eyes, and scratching his big hairy balls- back to his mountain home, hopefully wiser...but probably not. 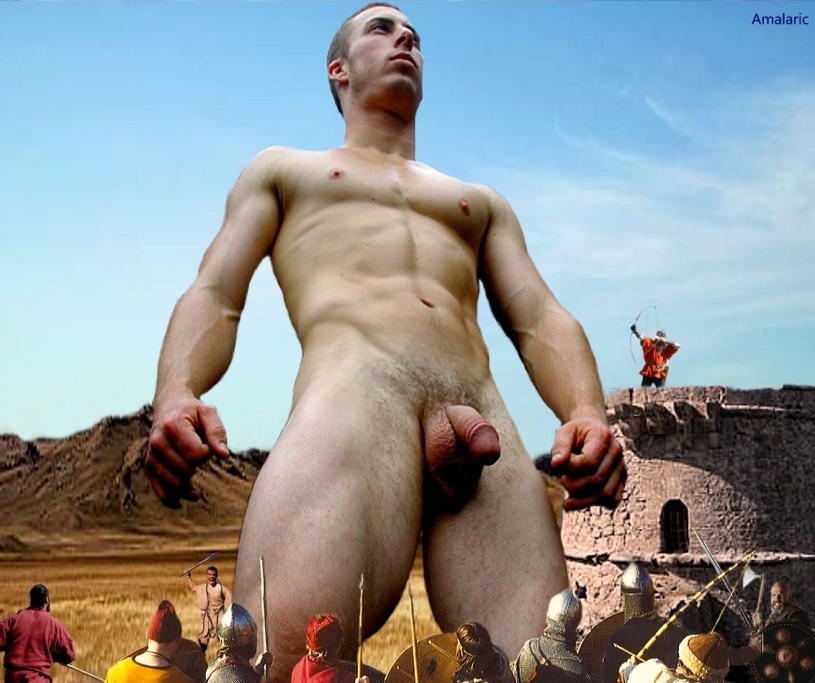