The Telemachus Story Archive
The Legend of the Seeker
By Amalaric
Email: Amalaric

Legend of the Seeker: 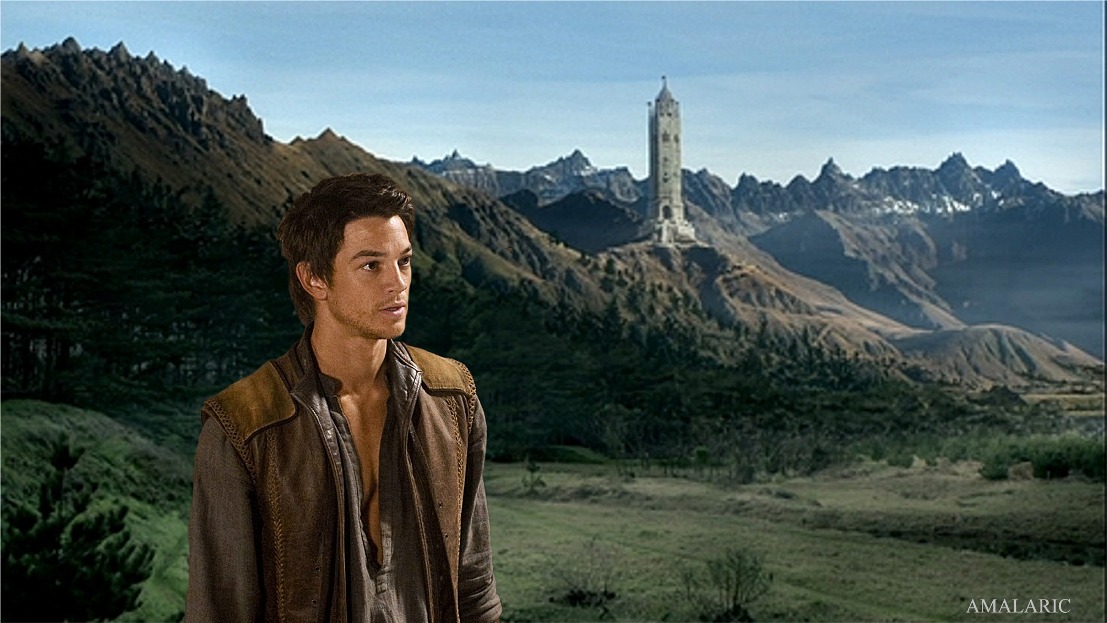 Richard Cypher grew up more or less happy in the magic-less forests of Westland; a lithe, well-muscled woodsman, simple in his tastes, direct in his manner, and with a heart and courage both noble and pure (though he would have been far too modest and unpretentious to put things that way). He could often be found shirtless, his smooth torso bathed in honest sweat, chopping wood in a sun drenched clearing or otherwise practicing the arcane art of forestry safe in the assumption of simple joys, innocent pleasures, and hard work well rewarded. Life moved with a steady rhythm and he was content for it to do so until, one day…

Richard was discovered by one of the Midland Confessors; a beautiful young woman named Kahlan Amnell. It was she who revealed to the handsome Westlander the nature of his true destiny, not to remain a simple woodsman, but rather to be the long-prophesied Seeker- a hero who arises in times of trouble and seeks out evil. Richard’s great heart was troubled as there seemed to be evil in abundance! Darken Rahl had already invaded the Midlands and threatened the whole world with a new advent of barbarism. With a heavy heart the Seeker reluctantly assumed his heroic mantle and began honing dormant skills- as swordsman, adventurer, and all-around studly good guy. 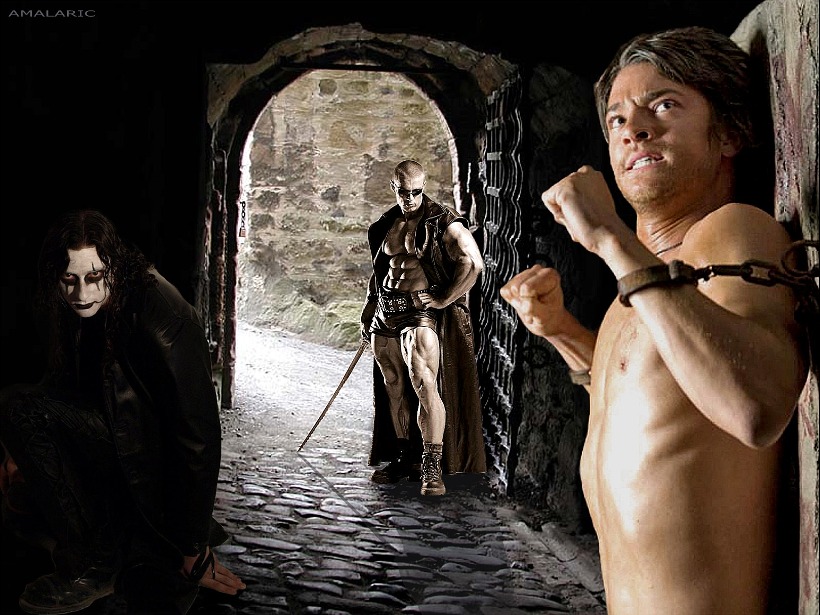 The ambush was unexpected and, might as well admit it, humiliating as well. To be taken by a woman, albeit one of severe, almost frightening, beauty, seemed to Richard a terrible reproach somehow besmirching his masculinity. Even so, what was done could not be changed and the captive Seeker was hauled to a mighty tower by the minions of the mistress who called herself a Mord’Sith. There he was stripped to the waist and chained to the wall of a dungeon, watched by her minions and well guarded. Escape for the moment seemed impossible. The half-naked stud strained against his bonds, his mind a frantic whirl as he tried to swallow the rising bile of panic. What the fuck are you going to do to me? 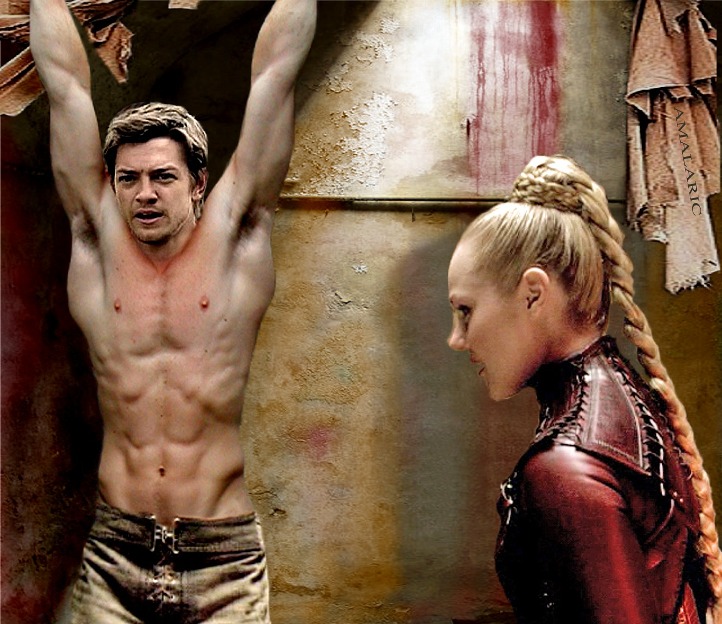 The thought was soon answered as the handsome prisoner was taken into a deeper dungeon where old blood splattered the shadowed walls in abstract patterns and the sepulchral light cast deep shadows, filling both the corners of the room and his mind with dancing fear. The shirtless hero was tightly strung up; dangling over a pit by bloodied wrists as the Mord’Sith arrogantly gazed at her half-naked prey. His eyes widened as a niggling thought coalesced in his roiling mind- This chick is farking crazy!! Not only that; she’s kinky-crazy…and not only that; her kink is making strong, muscular men scream in agony… And then she introduced herself, curtly and to the point- my name is Denna…and shoved the blunt end of a thick, slick, and black-magical wand that would have resembled a wicked-huge dildo or, perhaps, a cop’s black jack in another world straight into the young hero’s taught gut. The explosion of pain left Richard gasping, shaking in his chains and running hot sweat. Searing heat assailed him again as the Mord’Sith lightly caressed his pecs with the wand, gently tapping each nipple on his heaving chest. Richard imagined sharp hooks erupting from the blunt end, seeking out myriad nerve endings, seeming to rip each out slowly before going back for more. He screamed in an agony so intense that his lacerated throat oozed a trickle of blood over the ridge of his sensuous lower lip…’Ahhhhhhh,’ she cooed, ‘we make such fine music together, don’t you think?’ The writhing young stud- utterly unaware of the erotic sight he made, hanging tautly in his chains with loosely laced deerskin trousers clinging precariously to his narrow hips- bellowed a rough denial, coughing up more blood, twisting to no avail against his bonds. ‘FUCK YOU….UnghhhhhhhhhhARGGGGGG!!!’ Splashing the smiling Mord’Sith with humiliated tears as she rolled the wand, criss-cross, over the rippling expanse of his abs. Finally, he uttered the sweet words she had been waiting for… ‘Please…please…’ he gasped, nearly out of breath, head bowed with exhaustion. The Mord’Sith’s laughter sounded as brittle as shattering glass as she nodded consent. ‘Poor boy! Soon we will have a break…but first,’ she brandished the wand inches from Richard’s grimacing face, ‘open up, I want you to suck.’ 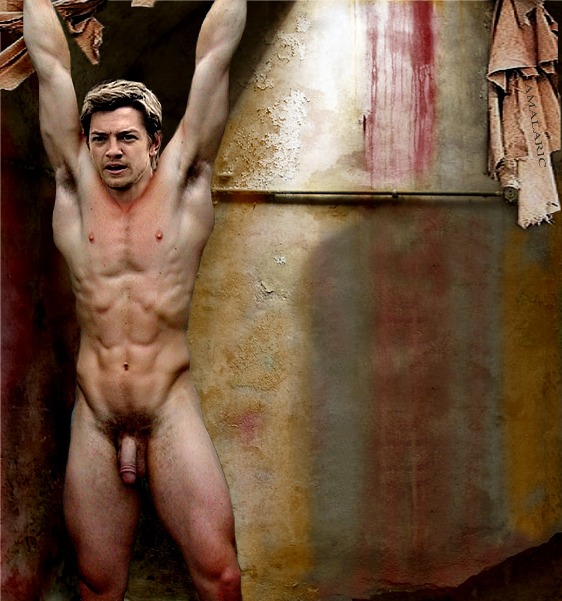 The young hero hung slack in his chains battling the now-familiar fear and a tide of despair unfamiliar in its intensity, undermining all that he trained for, all that he thought he would become. He had sought out evil and found it; that much, at least, was true. The woman was beautiful…The Seeker will give her that, at least…and, in the very early stages, as Richard watched her hungry gaze size up his shirtless body, he had instinctively responded- cock hardening for a while, the odd flash of lust animating a mind preoccupied with far more urgent matters. Until, of course, she began to wield the magical wand- then all lust, however tentative, had fled. Still…he had recognized her kink and, not entirely naïve, had fully expected the torture to eventually embrace a sexual dimension. 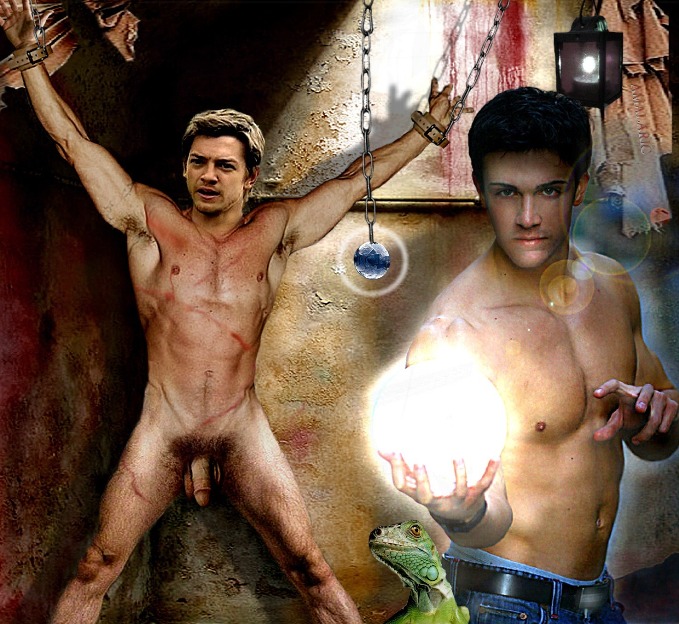 Richard shook his head in confused wonder even as she finally unlaced the deerskins and stripped off his trousers, leaving him hanging nude and utterly vulnerable from the rafters of the dungeon. Was this what he wanted? Could this turn him on?! The Mord’Sith- all hard edges and icy blond severity like a nightmare version of Grace Kelly tricked out in stiff red leather- giggled knowingly. She casually perused her prisoner’s hard muscular body, dwelt fascinated for several minutes on his thick cock and low slung balls- Such a fine contrast! The handsome young stud’s’ hairy manhood against the smooth backdrop of his almost hairless torso and boyish, if horrified, face - before tentatively reaching out, with her hand not the wand, and stroking the thickening shaft of his penis. ‘I must say,’ she sighed, ‘that it has been a pleasure…and how I would love to instruct you in further sessions, but- alas- it will not be so.’ Richard looked up, dark eyes glazed with questioning confusion before widening with horror as the door to the dungeon swung open. The Mord’Sith sighed again and relaxing the grip on his cock, sadly withdrew her hand. ‘This first, and only, session with me was just for warm ups…now, let me introduce you to my brother…’