The Telemachus Story Archive
Last Sale of the Day
By Amalaric (Illustrated by Amalaric)
Email: Amalaric

Well, it had been an eventful and very fulfilling day for the young and filthy rich patrician, R. Manlius Torquatus. The Nordic barbarians, after much fondling and some sporting torture- just to get them riled up, sort of like spiking an enraged bull in the neck and shoulders in a Spanish or Latin American bull ring- were sold off or rented to procurers and marched to the arena. Their eventual fate remains unknown, lost in the swirls of history, but rumor has it that the tall, blond, royally named Haakon survived many fights and may have lived to reclaim his freedom, having many adventures on the arduous journey back to his frozen homeland...

Late afternoon, the naked house slaves were busy removing the bracketed X-frame, other odd accoutrements, and sweeping the cobbles. Torquatus ate a light lunch of cheese, bread and some olives and quaffed a goodly amount of fine Falernian wine, trying to calm down. He contemplated a siesta, but the excitement of the day, throbbing in his racing pulse (and tenting his toga), was just too much. Collaring Calixtus, his freedman majordomo and right hand accomplice in nefarious pleasure, he hustled the grinning minion out the front gate of the town house and into the busy streets of Rome. They arrived at a nearly deserted slave market as the sun was setting, turning the sky into that indefineable shade of blue that borders on luminous, dusty purple. The patrician swallowed his disappointment; the market seemed empty, closed for the approaching evening. It was then that he spied, standing forelorn and seemingly abandoned, nude against a column, a supple young male slave; hardly a man, perhaps nineteen or twenty summers old, smooth with the rounded musculature of fresh youth and brighter promise. Torquatus perked up and, hurrying through the gathering shadows, stood before the unsold young man who averted his head, nevertheless helpless for inspection, chained as he was, naked against the column. The dealer sauntered forward, glad that he had kept this one on display, reading the look on the patrician's face- there was time for one last sale of the day. 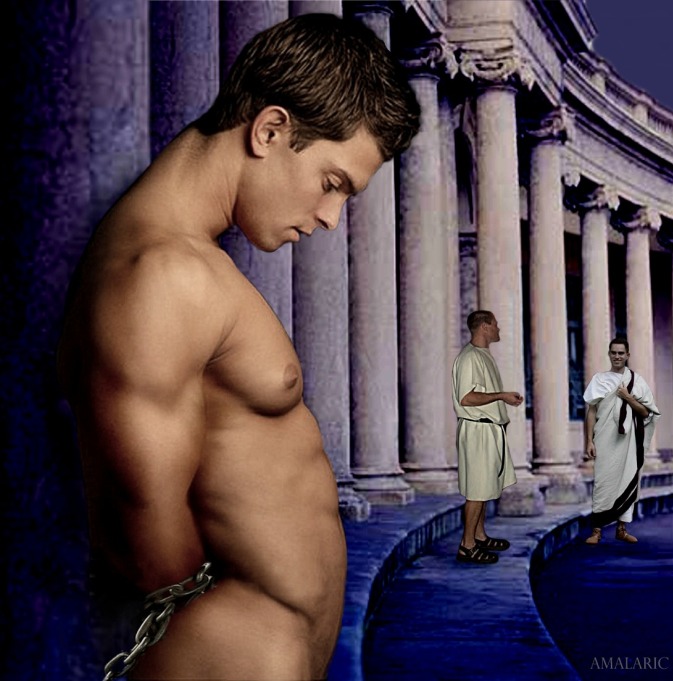