Settling down on the sofa after his excursion to the convenience store, Flash fumbled open his levis and hiked them and his jockey shorts down to his sneakers. He then began to peruse the offerings in his freshly purchased ‘men’s magazine’ (as the smirking clerk behind the counter had put it). Soon enough his rod had found its backbone and Flash’s calloused hand began to lazily scratch the eternal itch…when, suddenly, he paused in mid-stroke. What’s this? He read the ad again:

Six nights of sensual ecstasy, in the flesh with techno-amenities, oral and external neuro-enhancers and any number of other aids and modern marvels provided; our ladies aim to please and each has her own unique logo rhythm. Why wait? Book now for only 699.99 galactic units (tariffs and taxes not included). Inter-galactic shuttle service provided at minimal extra cost.

Flash considered the possibilities, found a decent pic and lazily shot his load, then, as if drawn by some mysterious force beyond his control, thumbed backward through the now sticky pages to the alluring advertisement. What the hell? It’s been ages since I’ve taken any kind of break and this super hero shit can wear a guy out… A day later he booked the tickets and in less than a week Flash Gordon boarded the inter-galactic shuttle for the eight hour flight to the planet Mongo. It was shortly after arrival, fully five hundred light years from his cluttered apartment on Earth, that Flash discovered the entire scheme had been an elaborate ruse. Oh, there was a pleasure palace but it was no x-rated resort as his suddenly limp pecker could attest. Rather, the pleasure palace was the lair of the notorious galactic outlaw and all around wacked out megalomaniac but, nevertheless, technologically gifted Ming (also known as The Merciless) and Flash knew within minutes that he was in a shit load of deep trouble! He tried desperately to flag back the shuttle but it was already several hundred thousand miles away before he even sensed any foul play. Soon enough, though, the rash super hero found himself surrounded by a phazer wielding mob of Ming’s minions who played cat and mouse with him for a while before he was KO’d and carried unconscious into the dreaded depths of Ming’s dungeons…

Flash regained consciousness stark naked and chained in a makeshift spread eagle position to a slick virilium-alloy rail in what looked to be a very high tech dungeon. He was proud of his hard muscular young body, head of bright golden, short cropped hair and light pelt of fair curls on chest, abs, and groin…but most of all he cherished his prodigious pecker, which never seemed to flag in its boundless energy or will to please. For all of those reasons, the cocky stud was not particularly ashamed at having been stripped, but the humiliation of captivity was another story. ‘What the fuck is going on here?!!!’ he shouted in manly tones of command. It was then that a nightmare vision, all draped in shimmering silk the color of blood, emerged from the shadows and nodded with an inscrutable smile. ‘Listen, asshole, and listen good…’ Flash squared his jaw and even balled his fists- bound securely to the virilium-alloy rail- and continued, ‘I came here (and paid a fucking fortune to do it) for honourable reasons…well, there was nothing illegal about it …and I DEMAND an explanation and immediate release and, if a refund is tendered IMMEDIATELY, I might even refrain from beating the living shit out of you and your staff.’ Pleased with his speech, the Blond Wonder took a deep breath. The tall figure in red silk merely nodded again before pulling a small cord attached to a bell. Finally consenting to address the naked captive in deep baritone yet strangely sibilant tones, he said, ‘Allow me to introduce myself, Ming. Yes you heard correctly; I am Ming and this is my planet Mongo but I am really…’ he paused and his chest visibly expanded under the red robes, ‘Master of the Universe.’ ‘And I’m fucking Bugs Bunny,’ Flash retorted, twisting in his bonds in a way that caused his fat cock and pendulous balls to swing back and forth in a hypnotic way.

The escalating verbal standoff was interrupted by the arrival of a mechanical droid. ‘You rang, Master?’ The irritating radio voice was specially designed to abrade the human nervous system. ‘Yes, 4plA, I will soon require your assistance.’ Ming turned back to his prisoner, licking bloodless lips before arching a heavily made up eyebrow, ‘I do suppose you deserve an explanation.’ Before Flash could reply, he let out a small shimmery sigh of pleasure and continued, ‘You see, this really is a pleasure palace…but the pleasure is all mine.’ He chuckled as if at an inside joke. ‘You really should be honoured, Mr. Gordon, as you have been specially selected for a noble purpose.’ ‘And what purpose might that be?’ Flash’s voice dripped with sarcasm. ‘I have already told you- my pleasure,’ Ming giggled, ‘but really, let us get down to…ah…business.’ He gestured to a strange machine a few yards and just to the left of Gordon. ‘This, my handsome young stud, is called the Orgasmatron and you have been specially selected- for reasons that should be obvious to everyone- for, ummm, treatment.’ Flash’s deep blue eyes widened with consternation as Ming gleefully droned on, ‘Yes, but the Orgasmatron really is a complex piece of engineering and is also synchronised to another machine that you should know about.’ He gestured upward with his pointed chin at a wicked looking nozzle suspended from the ceiling and trailing dozens of wires, ‘That is called (for want of something more creative) the Blow Torch. And here is how everything works…’

‘4plA!!’ Ming snapped, suddenly brimming with commanding energy, ‘Begin activation of…the Orgasmatron!’ The irritating droid squeaked assent and pressed several buttons. Immediately a bright purple ray shot from the barrel of an overhead outlet aimed at Gordon’s back side. As the ray caressed his naked skin it imparted a mixed cocktail of heady sensations that suddenly suffused the helpless stud; part prickly anxiety, part feverish intensity, and part ultra-heightened awareness. Breathing hard, now, Flash broke into a hot sweat. Following the first, purple, ray at an interval of exactly 3.6 seconds another, green ray, erupted from a parallel aperture. This one also caressed the suddenly writhing super hero and imparted a second dose of mixed sensations; naked skin suddenly tingling with near-ticklish hyper-sensitivity, a sensuous surge of inner heat, and a raw ache that worked itself from the inside out and back again. Flash groaned, shook his handsome blond head, and considered taking back his demand for a refund. Ming smiled, snapped his fingers and cried out, ‘Now, 4plA, engage the…ORGASMATRON!!!!’ The droid threw a lever and a third ray of bright yellow descended, not on Flash, but on the strange jumble of machinery connected by braided ropes of wire in a kaleidoscope of color to the virilium-alloy rail. Flash’s muscles suddenly flexed in a synchronized spasm of surprised stimulation; heart racing, pulse pounding, sweat-slick chest heaving with ragged breaths. He felt as if he were flying…no drowning…no flying…on waves of energy radiating from throbbing loins to every part of the physical compass. His thick dick suddenly sprang to rock hard life even as his imploding balls raced to contraction…and Flash Gordon, somewhere in a far away rational corner of his super-heated mind, prepared himself for the mother of all orgasms…

‘Not so fast, my boy.’ Gordon opened a single glazed blue eye and silently queried his captor. ‘Have you forgotten,’ Ming smirked, ‘the Blow Torch?’ Actually, in the jumbled rush of multiple stimulations, Flash had forgotten the other, more sinister, contraption. Summoning every ounce of stamina that only a super hero (in his situation) could have managed, Flash cocked his head sideways and caught a horrified glimpse of the Blow Torch suddenly belch to life. A rough cough of flame spat from its nozzle and curled a few feet in the air…straight at the naked man bound to the virilium-alloy rail! ‘What the FUCK???!!!!!!!!’ Gordon screamed as the shorthairs on his right forearm began to singe. Ming burst into wicked laughter, ‘There are always consequences for every action, my boy. Allow me to explain.’ ‘PLEASE!!’ Flash shrieked as a blister rose on his reddening shoulder. ‘As I was saying…’ Ming shook his head with mock impatience, ‘the Orgasmatron and the Blow Torch are linked and synchronised. To the extent that you succumb to the arousal imparted by the Orgasmatron, well, the Blow Torch responds…in kind, so to speak. Does that make any sense, Mr. Gordon?’ Flash merely reiterated his terrified plea. ‘The neat thing,’ Ming was clearly on a roll, ‘is that one keeps the other in check…for a while. See, as the Blow Torch heats up your…er…ardour might be distracted a bit and cool down…causing the hot breath of the blow torch to recede. But when that happens the Orgasmatron is able to more easily assert itself and…well, you know…’ He paused as if deep in thought. ‘Ah, there is one thing that you should DEFINITELY know. If, or should I say when, the Orgasmatron is able to induce that orgasm that you want so badly…keep in mind that it will then trigger the full belch of the Blow Torch. In other words, Mr. Gordon, I’m sorry to say that that will be the last time you ever get off…in fact, that will simply be the end…of everything.’ Frantically straining at his bonds, Flash Gordon felt the tide induced by the Orgasmatron subtly rising again. ‘So, let’s see how long you last, shall we? 4plA, set the timer!’ Turning once more to the horrified super hero, he whispered, ‘Last month we had a buck in here who was able to hold out for nearly an hour…’ He frowned at Flash’s stiff cock dribbling precum, ‘But I sincerely doubt that you will be able to break that record.’ 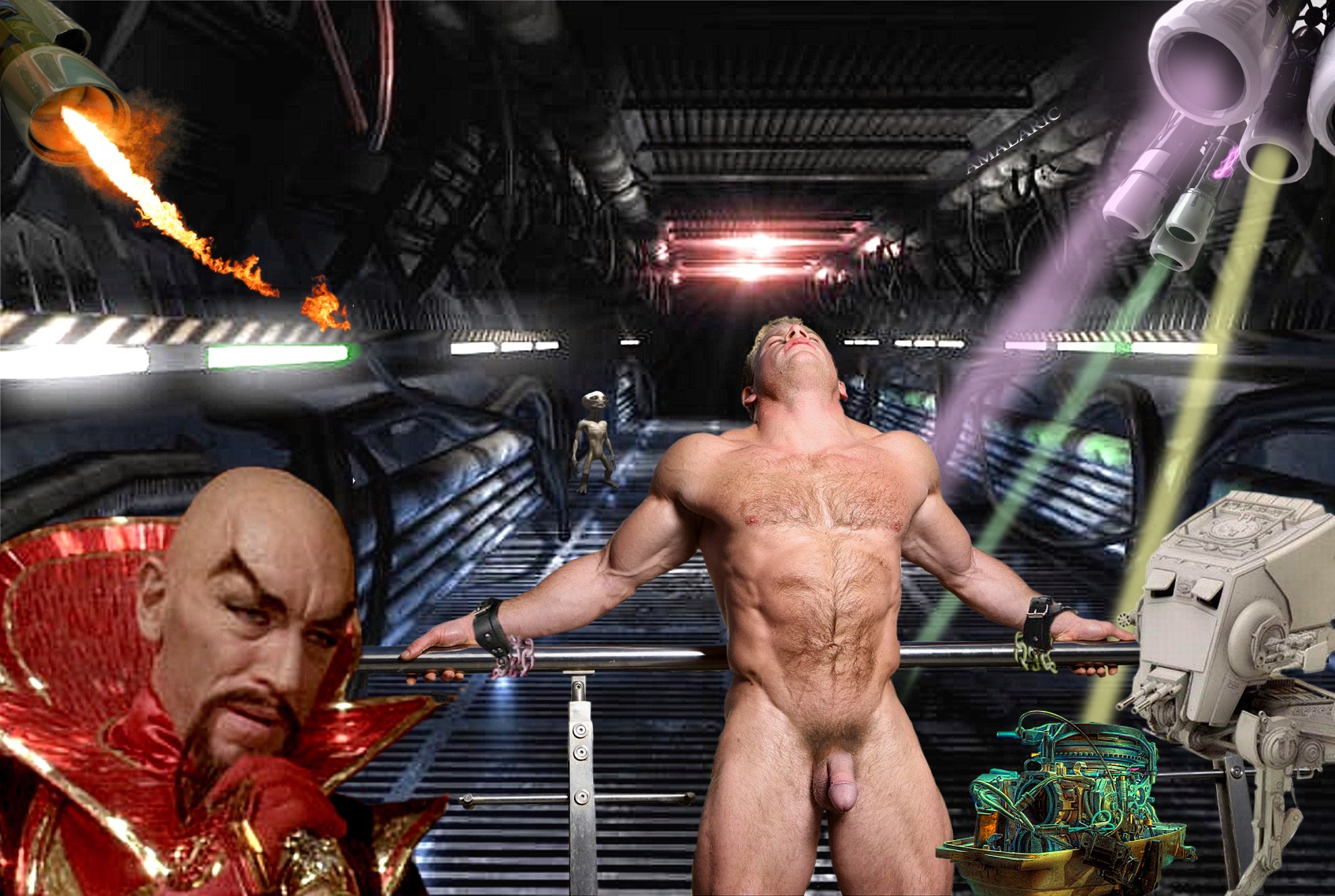